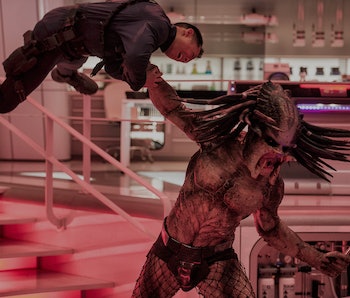 Is there a post-credits scene at the end of The Predator? Before you jump out of your seat, here’s what you need to know about what comes after the credits, and how the latest entry in the long-running franchise sets up a potential sequel.

Short answer: Nope. No post-credits. Feel free to duck out as soon as the credits roll. Or better yet, skip this mediocre sci-fi thriller entirely. Long answer: The Predator sets up a few potential possibilities for sequels and spin-offs.

Warning: Light spoilers for The Predator ahead.

The thing about the Predator movies is that, despite countless movies, crossovers, and other tie-ins, the franchise has never really had a clear through-line. Instead, the movies tend to jump around, only really anchored by the ever-evolving concept of the Predator itself. So there’s not much of a history to go off when talking about what might come next, but 2018’s The Predator does set up some potentially-interest possibilities.

For one, there’s a pretty decent cops-and-robbers story buried in this film. Basically, the first Predator we meet is actually a criminal to his own kind, attempting to bring stolen technology to Earth. Soon afterwards, a second, bigger Predator shows up and quickly kills the little one. But maybe The Predator 2 (or whatever it’s called) could take us into space for a deeper dive into the world of Predator-on-Predator crime.

The Predator offers up a global warming story as well, suggesting that visits from aliens are becoming more frequent as climate change increases because the Predators want to harvest as many humans as possible while they still can. So perhaps The Predator 2 could take place in a world on the midst of total destruction as Predators rain down on the world and gorge on what’s left of humanity.

Then again, maybe the best move is too simply end the series. What began as a vehicle for Arnold Schwarzenegger to yell memorable one-liners and shoot stuff in the jungle doesn’t really need to continue, right? And with no post-credits scene promising a sequel, perhaps it’s finally time to just let this franchise die.

The Predator is in theaters now.