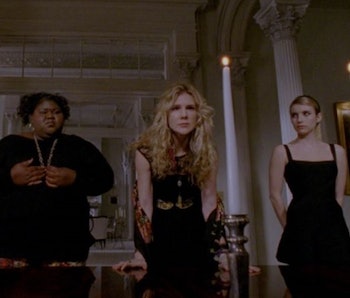 American Horror Story Season 8 premiered on Wednesday night and based on the new season’s title, “Apocalypse,” it certainly didn’t disappoint. However, if you’ve been following the news that this new AHS story is actually a crossover between two popular seasons, “Coven” and “Murder House,” then you might be a little disappointed. After watching the first episode, the question remains: where are Coven and Murder House in American Horror Story Season 8?

First, a quick recap. The episode begins before the nuclear bombs that set off our new story have started to fall, but not by much. In an upscale Beverly Hills salon, a rich celebrity has her hair styled by American Horror Story veteran actor Peter Evans as she learns that the world is going to hell. She makes a quick exit via chartered plane, leaving her husband (Billy Eichner) behind.

Meanwhile, a shady government organization is rounding up genetically superior teens and holding them in a luxurious underground bunker under the control of Kathy Bates (in a new role as Ms. Miriam Mead, not the racist zombie from Coven). We later learn that there are at least three of these outposts, and one of them is being used to torture rich people who paid millions of dollars each to secure a spot — if you think that sounds like the premise of the Fallout video games you’re not wrong.

The bombs fall and the surface world becomes contaminated with radiation. Then, as the first episode of AHS Season 8 comes to an end, the antichrist (Michael Langdon) shows up at Kathy Bates’ shelter, revealing that there’s another outpost and offering to guide the inhabitants of this one to it (assuming they don’t die along the way).

Overall, the episode received positive reviews from critics and fans alike, but the question remains. Where’s our crossover?

We still don’t have a clear answer to that question, but there are a few pretty big clues. The first is the realization that Langdon’s character might actually be the baby antichrist that was born in American Horror Story Season (“Murder House”). If that’s the case, then it seems likely he could be leading our survivors back to that very same haunted house.

Additionally, the revelation that there are other survivors in other outposts may reveal what our favorite witches have been up to in the post-apocalypse.

This is just speculation, but as AHS Season 8 continues you can expect to see even more familiar faces show up.

More like this
Entertainment
Sep. 13, 2022
With Pearl, A24 perfects its first horror franchise
By Andy Crump
Culture
Sep. 18, 2022
You need to watch the sexiest sci-fi thriller of all time on Amazon Prime ASAP
By Andy Crump
Entertainment
15 hours ago
Knock at the Cabin trailer gets roasted online for one bizarre mistake
By Alex Welch
Share: