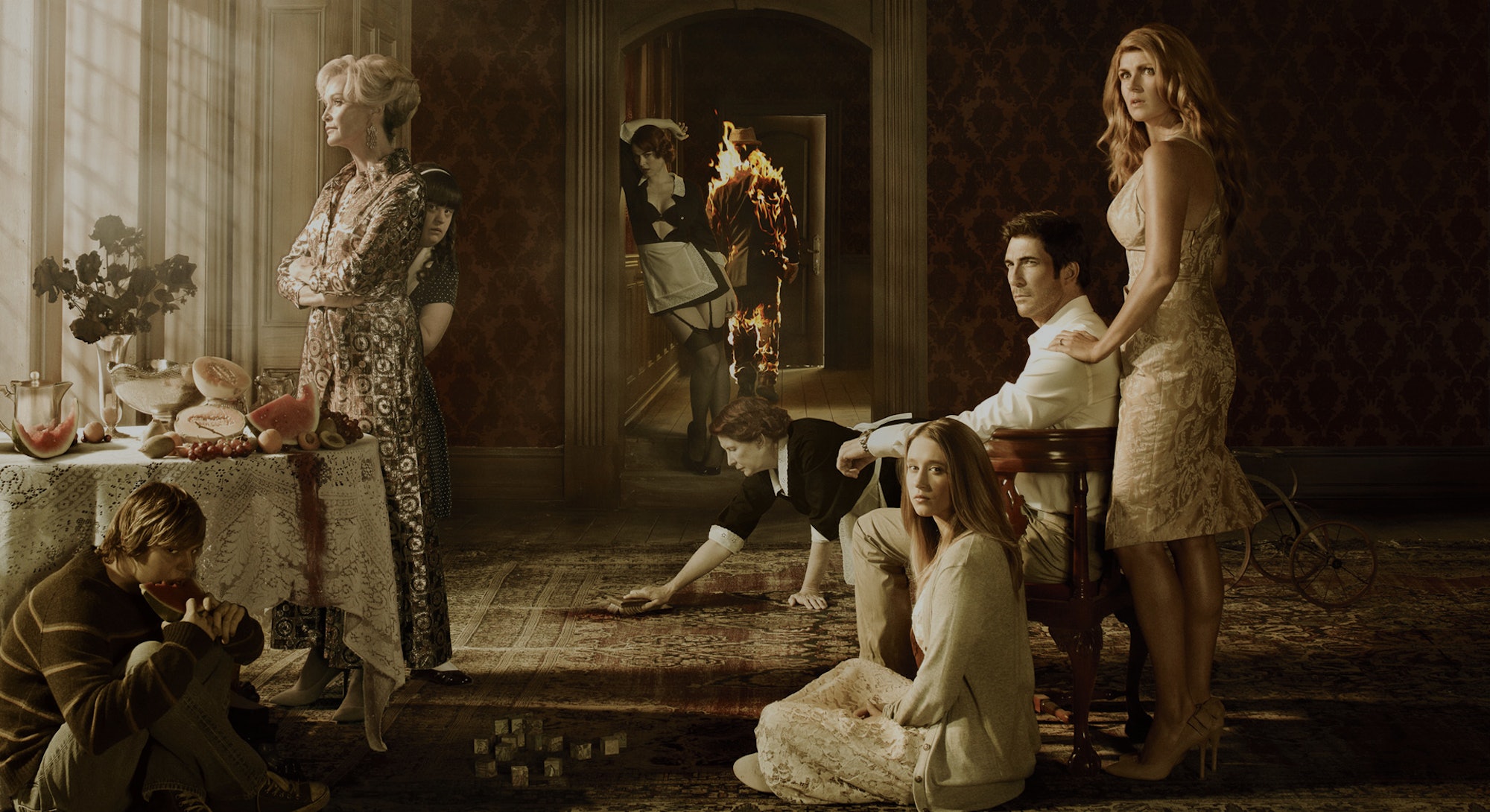 Would you make it to the end of a horror movie? I’m not totally sure I would be the one stumbling out of the woods, panting for breath and covered in my friends’ blood at the end of it all; blonde hair, glasses, and the over-eager “fight me” fierceness of an irritable house cat don’t tend to poll well with serial killers. I’m white, so that raises my survival chances quite a bit, but I still don’t hold out high hopes. It’s a painfully common fictional reality — death by horror movie. And like many who’d share my fate and yet still somehow enjoy horror as a genre, my enlistment into the ranks was an agonizing one, with the credit (or, maybe, the blame) belonging entirely to American Horror Story.

When I was growing up, there were a few years where my parents and their friends would lock themselves in our basement for Halloween and watch horror movies all day. It was an act of masochism; they’d emerge from the shadows hours later, lamenting amongst themselves about their life choices. My younger brother wandered in to find them watching The Ring one year and then didn’t sleep for two weeks, which I think put a stop to the tradition. But my parents are a prime example of a cultural phenomena that many fall prey to: Halloween makes people feel obligated to be scared shitless whether they like to be or not. At the time, wanting to be scared by horror movies baffled me.

American Horror Story changed that. It pulled me, neither kicking nor screaming, into the horror genre by dropping ridiculous characters into an approachable narrative, insofar as horrible people and ghosts running through an old house is approachable. But it was a television series I could get invested in with beautiful people who lived their lives on screen for more than two hours at a time, and that was good enough for me.

Over a decade after The Ring incident, I get the horror movie thing, I love the genre, and — as a socially aware human being — that comes with quite a few complications.

When FX premiered the first season of Ryan Murphy and Brad Falchuk’s horror anthology series, Murder House, in October 2011, my initial reaction was: Oh, hell no. At the time, AHS was insanely far out of my wheelhouse. College (and a lucky guess of my parents’ Netflix password) changed that.

Once I had “free” access to the first season, it took three tries with most of my freshman year dorm to get through the first episode of AHS (yes, we were wimps) and realize that horror was, like, kind of fun. I wanted to like horror and I’d grown up with science fiction and fantasy, so adding blood sacrifice to a familiar equation was just what my angsty little heart needed. The combination of my then-undiagnosed anxiety, my relatively sheltered upbringing, and an overactive imagination had left me as a prime target for jump scares and fear of demonic possession.

The only thing that didn’t bother me was gore, which probably says a lot; the gushing blood and predictable, soon-to-be-troubling tropes of more mainstream horror didn’t really do anything for me, but I still allowed myself to dive in for the sake of pure enjoyment. Embracing the illogical fear that AHS and horror in general caused to well up inside was preferable to the bullshit going on in my own head at the age of 18.

At first, the horror genre turned out to be nothing more than a fabulous combination of kitschy tropes. I enjoyed it for the sake of pure entertainment, revelling in familiarity and the kind of manic laughter that bubbles up after a particularly good jump scare. I traveled deeper down the cobweb-covered rabbit hole, explored sub-genres and classics, and dealt with the whiplash American Horror Story so commonly bestowed. Then I started to pay attention.

The issue, as I soon discovered, is this: the horror genre and its associated tropes are often offensive and problematic. Shocking, I know. More often than not, the more labels you can add to yourself that differentiate from “white,” “straight,” and “male,” the more marginalizing horror as a genre can become, which is a characteristic of… most things.

That’s not to say all of horror is bad. I love (most) horror. Even though Murphy’s maddening house of horrors would eventually reveal itself to be trash, the genre can be much more socially aware than most mindless mainstream bloodbaths would have you believe. What matters is how creators — including Murphy — use what they have and what kind of message they want to broadcast to the general populous.

Because, whether or not you like it, art is always up for social and political interpretation. A show as long-running, self-involved, and commonly revered as American Horror Story should be working harder than it does to make something worthwhile — and it’s like it doesn’t even try.

Take the show’s third season for example. Coven revolves almost entirely around women. It was undoubtedly the most hyped and anticipated season of the show, even to this day — people were so excited. Finally, a mainstream horror story that took women into account, with a particular highlight on women of color overcoming their oppressors. It was the internet’s darling, the season that was aesthetically pleasing to every damn Tumblr blog out there. But the monster would soon crawl from beneath the bed.

Coven passes the Bechdel test, which is really more of a bare minimum standard, with flying colors, but that’s where its “progressivism” stops cold. American Horror Story has a habit of masquerading as a progressive show while pushing conservative ideals, and that reality has only grown more aggressive from season to season. Coven featured damaging topics such as women constantly in competition with one another, the lacking validity of aging women, and a literal killer vagina. That isn’t to mention Coven’s lacking respect for its non-white characters, the bastardization of mental and physical disabilities, the obvious pleasure it took in depicting the brutal torture of slaves, and the idea that racism can be solved with a single viewing of Roots.

The stereotypes and the violence that AHS totes around and sells to a general audience is terrifying, and not in the way that I want horror to terrify me. Not that AHS does anything for me anymore. Now, it gets an eyeroll and a threaded Twitter rant in its general direction. I stopped officially watching the show as a fan a few episodes into the fourth season, Freak Show, after seeing the path it was going down.

I get that Freak Show wore the convenient mask of “we’re just portraying the truth of how these things were in the past.” But that’s all it is: a mask that Murphy hides behind to sell a convenient portrayal of a horrifying truth that deserves to be talked about, just not in this way. Once you peel back the mask and think on it, what you find underneath is a shell of what could be — no reversal of the trope, no voice for an often tormented minority group, and no lesson to learn that justifies the shitty situation.

The history of “freak shows” and the mistreatment of the physically disabled and the physically “different” shouldn’t be ignored as it often is, but it also shouldn’t be sexualized, wrapped up in a pretty dress, and cranked up to 11 for the amusement of the masses.That’s what Freak Show did to its characters, and it is, to my knowledge, some of the worst ableism on television in the 21st century. The fact that it was as adored as it was by fans simply put it over the edge. Plus, adding a serial killer clown into the mix was just on par with Murphy’s usual M.O.: lazy, last-minute tropes that take away from whatever the hell it was he was trying to sell his audience in the first place; aliens in Asylum, Stevie Nicks in Coven, and cannibalism in Roanoke fall into that same category.

Due to, uh, all that, I’ve never “noped” my way out of a fandom faster than I did American Horror Story’s, and it’s doubtful that this latest season, Cult, will pull me back in. Placing cultural realism in AHS’s inept grip isn’t something anyone should take lightly; the show hasn’t done anything to prove it’s capable of treating the “horrors” of post-Trump America with any sort of intelligent commentary.

To be fair, American Horror Story is not the only perpetrator of violent sexism, ableism, and racism in the horror genre, not by a long-shot; it just so happens to be the widest, longest-running target out there. Stereotypes and their caricatures run rampant through all six previous seasons of AHS, and it’s doubtful that all these years’ worth of think pieces have changed Murphy’s mind about what makes “good television” in time for Cult to contain any sort of break-through.

A lot of people will probably scoff at the notion of “culturally sensitive” horror, but we should understand by now that it’s possible. It’s also my favorite. Hush, The Witch, Get Out, and It Comes at Night are all recent, wildly popular examples of culturally aware horror. Rather than making the usual victims of society’s shortcomings the punchline, these kinds of films widen the scope of what’s possible in horror by giving agency, life, and relatable narratives to the same characters who’d usually die in most horror movies and television shows.

As it turns out, it’s not that hard to allocate resources to projects that give a shit and attempt to be mindful of others. I’m not saying we should stop making horror movies that toss buckets of blood around and kill scream queens, or that all horror movies need to have some holier-than-thou message that makes you think. I’m just asking that creators think a little more rather than letting existing, harmful tropes run the show. I’m just asking that I not be so certain who’s going to live and who’s going to die.