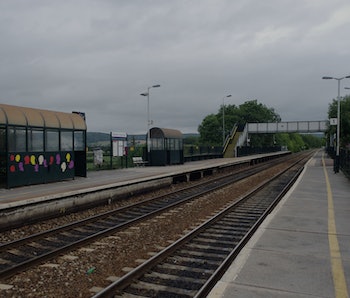 Last Thursday, the BBC’s Amanda Ruggeri reported on the infamous ghost trains that travel across Britain’s rails. Devoid of passengers and sometimes entirely left off of train schedules, the reason behind why these trains run is almost as baffling as the fact that very few know they even exist.

Some of the stations, too, that allegedly allow “passengers” to board and disembark these unused rail lines are basically stations in name only. The Snaith Station that runs along the Leeds-Snaith rail line has no ticket machines, no offices, and no cab lines standing by. The ghost trains that run on this line only depart Snaith once a week, and return from Leeds just twice a week.

The whole piece is a pretty interesting read, but I’ll cut to the chase for you if you haven’t got the time: The ghost trains and stations exist, as Bruce Williamson of the advocacy group RailFuture told Ruggeri, “just for legal placeholder to prevent the line from being closed.”

“Closing down a line is cumbersome. There must first be a transport appraisal analysing the effect of a closure on passengers, the environment and the economy. The proposal is submitted to the Department of Transport and at that point its details must be published in the press, six months ahead of the closure. Then comes a 12-week consultation period, during which time anyone is welcome to protest; public hearings are sometimes held, especially if the closure is controversial. Then, finally, the plans are submitted to the Office of Rail and Road, who decide if the line closes.

“As a result it often costs less — in terms of time, paperwork and taxpayers’ money — to keep a line running at a bare minimum. Other nations run limited service trains, but experts say that the particular politicisation of Britain’s railways – and the creation of so many steps required to close them – means that when people say “ghost trains,” they’re usually referring to British ones.”

It’s a bit insane to think that train operators would basically keep throwing money to keep a ghost line open solely because it’s a lot of paperwork to deal with. But Ruggeri points to how some ghost services have risen from the dead and returned to full service because of demand. In those instances, it would have been way more expensive to let the line go and turn to shit, and then return to it and have to repair it or tear it up and start from scratch.

Meanwhile, across the Atlantic Ocean, thousands of miles of railroads in the US have been abandoned over time. While UK law makes it extremely hard to abandon rail lines, it’s a pretty easy thing to do in the U.S. under the Federal Code — after a quick notice from the train company, the land is either sold off to another company or reverts back to the original owners, if there were any.

Of course, Britain is a fraction of the size of the U.S., so if the bureaucracy controlled rail abandonment as rigorously here as it does there, we’d all probably be paying much more in taxes. Hooray for orphan rail lines!