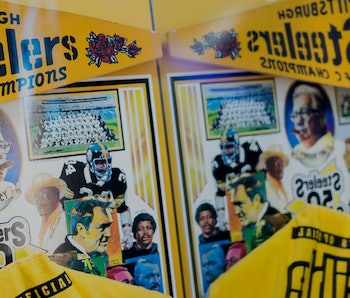 Le’Veon Bell has not reported back yet, and Ben Roethlisberger will have to air it out to Antonio Brown several times for the Steelers to have a guaranteed chance of beating the Cleveland Browns on Sunday.

To predict the result of this Week 1 match-up, Unanimous A.I. used what’s known as swarm intelligence to forecast the week’s slate. About 50 NFL worked together as a hive mind to make picks. As you can see in the animation below, each participant controlled a little golden magnet and used it to drag the puck toward the answer they thought was the most likely outcome. As the users saw the puck move toward a particular outcome, it triggers a psychological response. They readjust their decision-making, building toward a consensus.

There are obvious distractions in the locker room, but as you can see above the swarm predicts that those external factors shouldn’t be a factor toward the result. Pittsburgh should defeat Cleveland.

The Browns host the Steelers in a 1 p.m. kickoff on Sunday, September 9.