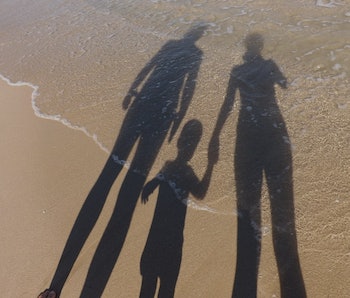 Each day, it seems more and more unlikely that we’ll hit the World Health Organization’s goals for physical activity and reducing the “obesity epidemic.” While we won’t know for sure if we’ll miss the mark until 2025, thanks to research published in Nature Communications, we can start assigning blame now. If all else fails, we’ll just pin it on dad’s genes.

Led by a team of scientists hailing from Germany, Denmark, and Austria, the study illuminates how genes from each parent contribute to the way fat cells develop in the body. Fat can differentiate into two types: white tissue, which stores energy and is associated with obesity and metabolic disease; and brown fat tissue, which actually burns energy and produces body heat.

Everyone has a little bit of both types of fat. To determine which genes are responsible for the two types, authors of the new study looked at mice with a high proportion of either white or brown fat. They found that the genes controlling fat differentiation belong to a small percentage of genes classified as “monalelleic.” Most genes are expressed equally from two copies, or “alleles,” inherited from each parent. In some cases, both parents provide the same allele of a particular gene, while in other cases, parents provide different alleles, which results in a variety of physical traits, like eye color and blood type.

But monoallelic genes are different. Although you have two copies of the gene — one from your mom and one from your dad — only one copy actually gets expressed.

Study co-author Jan-Wilhelm Kornfeld, Ph.D., from the University of Southern Denmark tells Inverse that when it comes to genes related to white fat, alleles inherited from dad are more likely to be expressed:

“Some of these paternal genes favor growth, and it is in the interest of our father to make us strong and endow us with enough energy resources, so that is to favor white fat development,” he says.

Mom’s Genes to the Rescue

In a beautiful example of parental cooperation, Kornfeld and his co-authors found that with a little help from mom’s genes, these effects can be mediated or even reversed. A gene called H19 that has the power to mitigate the effect of dad’s genes on fatty tissue. People tend to express the copy of H19 comes from mom’s side:

“Our findings show that H19 acts as a so-called gatekeeper for a handful of genes that normally suppress the development of brown fat,” Kornfield says.

Martin Bilban from the Medial University in Austria adds that they then tested this finding by genetically engineering rats to express higher levels of this maternal H19 gene. When they did this, the obese rats who were already rolling in white fat underwent a “beigeing” effect:

More studies will need to be done to see if this can be replicated in humans, but in the meantime, we can thank mom’s copy of H19 for doing some fat rats a solid.