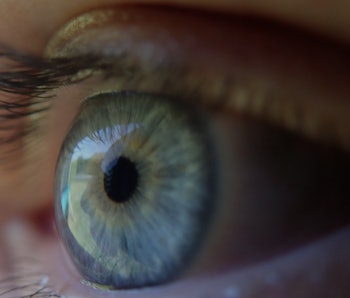 Some people can easily walk away from traumatic experiences and get on with life. However, for nearly 5.2 million Americans, these experiences result in post-traumatic stress disorder. And for others, the psychological trauma creates entirely different problems. Effective treatments can range widely, from established methods like cognitive behavioral therapy and psychoanalysis to experimental ones like Tetris. But there’s one obscure treatment getting more attention these days, and all it involves is focused eye movement.

It’s called EMDR, or Eye Movement Desensitization and Reprocessing. It’s pretty simple: An individual experiencing negative consequences from trauma has to focus on the bad memories or thoughts while moving his or eyes back and forth; a therapist may get the ball rolling by moving their fingers or some instrument side to side. Psychologists who use EMDR believe it helps in rejiggering the traumatic memories that are less potent — and therefore, less permanently burned into the patient’s head.

The approach was developed in the ‘80s by psychologist Francine Shapiro, and it is part of a broader eight-step method that essentially replaces the negative thoughts and emotions with what Shapiro calls “positive cognition” (PC). The rapid eye movement phase helps desensitize the traumatic memory, and then, during continued bilateral stimulation, the patient is tasked with uploading a particular PC as a substitute. Shapiro conducted a formal study and published the results in 1989, writing that, “a single session of the EMD procedure successfully desensitized the subjects’ traumatic memories and dramatically altered their cognitive assessments of the situation, effects that were maintained through the 3-month follow-up check.”

Since then, EMDR has remained relatively obscure as a form of treating psychological trauma, but it’s picked up in popularity in recent years. The American Psychiatric Association, the Departments of Veterans Affairs and Defense, the International Society for Traumatic Stress Studies, and the World Health Organization all endorse EMDR as an effective treatment of trauma.

It apparently works just as well as other forms of treatment, while being faster and much more affordable. Vincent Felitti, a California-based physician and a leading expert of childhood trauma, told The Atlantic that he’d prefer to recommend patients for EMDR over psychotherapy.

It’s pretty easy to see how EMDR could be an effective way to treat trauma victims on the fly. Soldier and refugees in war-torn areas who don’t have the luxury or time to take part in more conventional therapies could pretty quickly take part in a few hour-long EMDR sessions and see at least somewhat of a reduction in their PTSD symptoms.

It’s important to remember anyways that trauma is a fickle thing. One person’s cure-all is another person’s junk medicine. As more people elect to go with EMDR treatment, they may find what they’re looking for, and they may at least be able to tick another treatment off the list while they look for something that works.