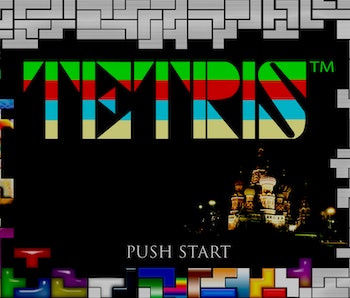 We all have bad memories we’d like to sear from our brains, but for the 5.2 million Americans who suffer from post-traumatic stress disorder (PTSD) each year, those memories cause more than just a few moments of sour feelings and insufferable social media posts. Treatments ranging from drugs to cognitive therapy to electroconvulsive therapy have produced a wide range of scattered results — and regardless if they might work, many patients just don’t have access to those resources.

But new research seems to suggest that Tetris — yes, that game — could help treat individuals suffering from flashbacks of traumatic experiences.

The way our mind turns experiences into memories — be they pleasant or harmful — is called memory consolidation. This can happen within just a few hours of the experience, when the memory turns from a raw, malleable state into something more permanent. But when memories are recalled, they are actually being recreated in the head, and therefore return to a malleable state, at least temporarily. Many kinds of psychologists have been investigating whether those memories can be “reconsolidated” as they’re recalled, so that they are transformed in a way that makes them benign or less harmful.

A 2010 study established how playing Tetris within the first six hours of a traumatic event could prevent complete memory consolidation, presumably because the puzzle game competes from the same resources bad memories would use to become permanent.

In this instance, the researchers took a more realistic approach and wanted to see whether Tetris could treat victims for whom those bad memories were already solidified in the mind. They screened a short film of horrible scenes for participants and recalled those memories by showing stills of the film the next day. Patients who played Tetris soon afterward were found to have less flashbacks — “virtually abolished,” the researchers write — of the film over the next week than those who hadn’t.

Of course, both groups were equally able to recognize images from the terrorizing movie. “Our procedure modified intrusion frequency while leaving recognition memory intact, which indicates that trauma-film memory had not been erased but ceased intruding involuntarily,” the researchers indicate. So, while flashbacks stopped, the memory wasn’t gone for good.

Although this method appears to help stop terrorizing flashbacks from recurring, it seems like more of a band-aid than a cure, since the memory remains intact and still has the potential to elicit just as much stress, anxiety, and panic as the experience itself. Other psychotherapeutic treatments attempt to desensitize the patient to the experience, or work their way through it in a way that reduces the anguish it causes.

Still, for many people that perhaps don’t have a shrink standing by to help treat them, a video game could be an easy way to soften the effects of a particular rotten day. That’s just until the day when we can zap our memories out à la Eternal Sunshine of the Spotless Mind.