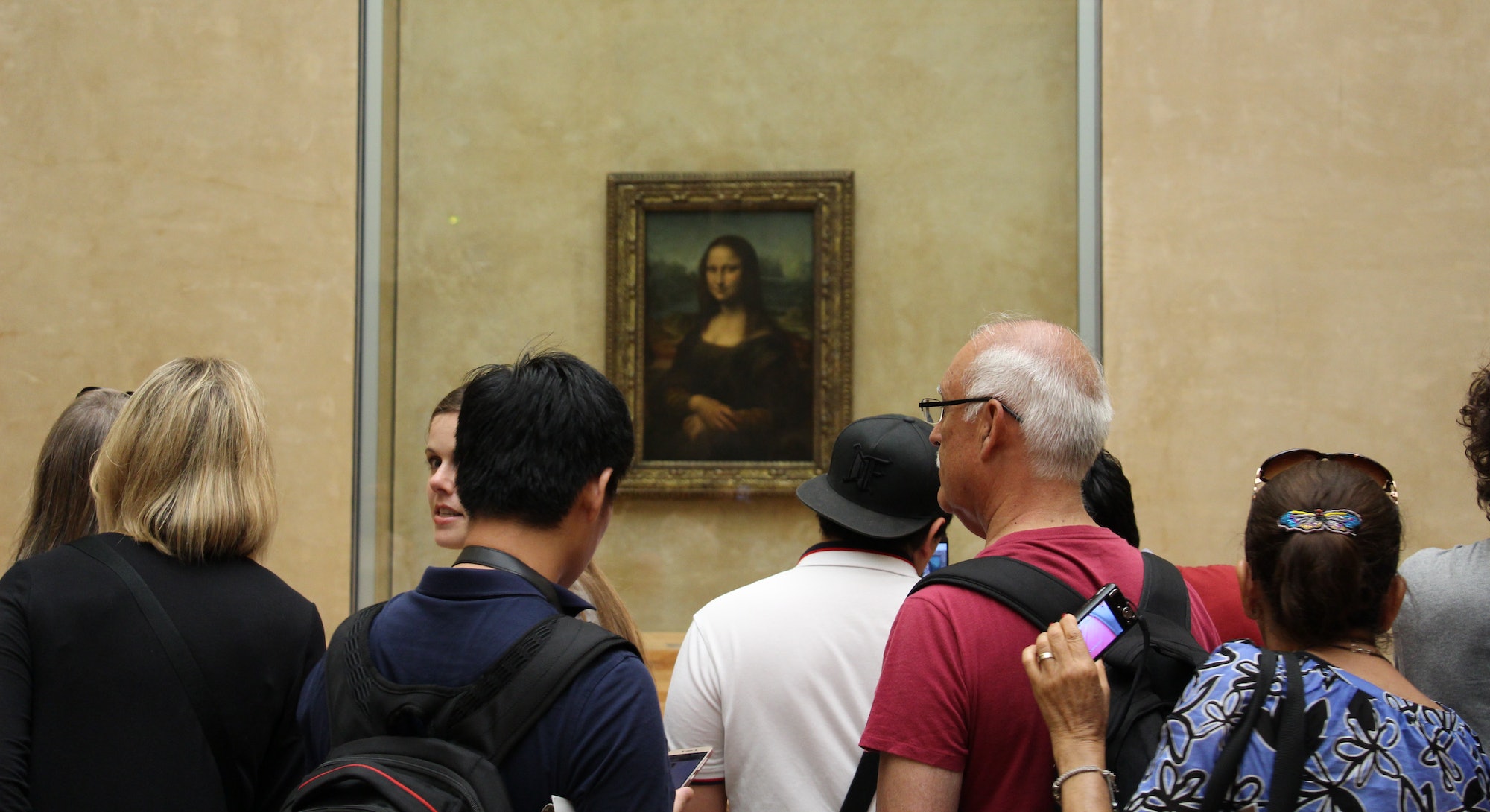 The “Mona Lisa” has her own room in the Louvre, where she attracts six million visitors each year. Her room is frequently crowded with frenzied guests attempting to catch a glimpse of her enigmatic smile. Over a year ago, Boston physician Dr. Mandeep R. Mehra was in that endless line, hoping to do the same. During the long wait, he pondered the details of La Giaconda’s strange looks — her yellowing skin, her thinning hair, and of course, her lopsided smile.

In that time, he came to a realization: This woman is ill.

“I had the chance to just stand there for an hour and a half staring at nothing but this painting,” Mehra, medical director of the Heart & Vascular Center at Brigham and Women’s Hospital, tells Inverse. “I’m not an artist. I don’t know how to appreciate art. But I do sure know how to make a clinical diagnosis.”

Over the next year, Mehra dug into the history of Lisa Gherardini, the woman in the legendary portrait, as well as the public health records of historical and modern-day Florence, where the painting was created. As he outlines in a new paper in the Mayo Clinic Proceedings journal, Gherardini suffered from an ailment that is still common — and quite treatable — today.

“I don’t know how to appreciate art. But I do sure know how to make a clinical diagnosis.”

When you are stuck in a small room at the Louvre, looking very closely at the “Mona Lisa,” says Mehra, you start to notice a lot of strange details.

Take, for example, the inner corner of her left eye: There’s a small, fleshy bump there, just between her tear duct and the bridge of her nose. Her hair is oddly thin and lank, and her hairline is receding behind her veil. She has no eyebrows whatsoever.

If you look closely at the whites of her eyes, you’ll notice they are abnormally yellow — far more so than her skin.

The right side of her neck has a faint but visible bulge, and her face is slightly puffy.

And on her right hand, folded delicately over her left, there’s a noticeable lump between her index and forefinger.

“It became clear to me that there was something wrong with her,” says Mehra.

There have been countless theories explaining why the “Mona Lisa” looks the way she does. Most historians agree that she is Lisa Gherardini, a woman in her late twenties and wife of Francesco del Giocondo, a wealthy Florentine silk merchant. But beyond that, not much else is known for sure. “People have proposed many theories,” says Mehra. “He was Leonardo Da Vinci himself in feminine form. Or his rendition of what an ideal form of a woman should look like.” But after spending some time with the “Mona Lisa,” he was not convinced.

“As I began to look at this painting with some great depth, it became clear that neither of those two theories could be supported because he would never have allowed those imperfections and the accuracies of the imperfections to emerge if that was the case,” he continues.

Da Vinci, after all, was not only one of the most celebrated painters of his time but also an exceptional anatomist. When it came to capturing small details, he did not mess around. And so the bulges on the eye and neck, the lank hair, the yellowing sclera could not have been accidental.

“I knew I was looking at a masterpiece by an extraordinary artist who would have captured every small embellishment in an incredible way,” says Mehra.

As Mehra outlines in his paper, each of the physical abnormalities he spotted on the “Mona Lisa” has a known medical correlate.

The bump next to her eye, for example, is likely a xanthalesma, a yellowish cholesterol deposit under the skin, usually near the eye. Similarly, the bulge on her hand is probably a type of fatty benign tumor known as a lipoma or a xanthoma, if it’s rich in cholesterol.

The bulge on her neck, meanwhile, could be the beginnings of a goiter, an abnormal enlargement of the thyroid gland. “It’s not an aquiline neck,” says Mehra. “You don’t actually see the trachea.”

“So, I’m basically looking at a receding hairline, loss of eyebrows, a swelling in the neck, coarse, thin hair,” he says. Then there’s the xanthalesma and the lipoma or xanthoma. “And I’m looking at a slightly edematous, swollen woman with no hair throughout. That, to me is a classic picture of clinical hypothyroidism, or an underactive thyroid gland.”

Put that way, it looks plain as day. Poor Lisa.

This diagnosis — common in women who had just had a baby, like Ghirardelli — even explains the perplexing smile of the “Mona Lisa.” While previous historians had tried to chalk it up to Bell’s Palsy, a form of temporary facial paralysis that weakens the muscles in one of half of the face, Mehra says this explanation doesn’t hold because there’s no unevenness in the rest of her face.

His hypothyroidism diagnosis, however, accounts for her inscrutable expression, and casts a certain sadness over the portrait.

“The more characteristic reason for why that smile is not a full-blown smile or is partially asymmetric is probably hypothyroidism,” he says, “because when you have hypothyroidism you’re a little depressed, and your facial muscles are puffy and weak. You can’t even bring yourself to a full smile.”

To back up his diagnosis, Mehra examined life in 16th-century Florence, looking for evidence that hypothyroidism might have been a common ailment.

Sure enough, he found that the food being eaten at the time — largely vegetables — was heavily deficient in iodine, which is necessary for maintaining thyroid health. Furthermore, many of the vegetables Renaissance Florentines ate, like cauliflower, cabbage, and kale, were goitrogens, or “goiter-promoting foods,” he says. Other studies on paintings by Renaissance masters back up his theory: About one-third of the paintings by Da Vinci’s contemporaries, like Caravaggio or Raphael, depict people with thyroid problems, says Mehra.

The problem Lisa Ghirardelli faced was not, it seems, isolated to the era in which she lived. Digging through public health records, Mehra discovered that thyroid deficiency remains an issue in some parts of modern Italy. “As recently as 1999 there are populations of people in iodine-deficient areas in Italy that had as much as 60 percent incidence of thyroid swelling,” he says.

The hypothyroidism diagnosis means that Ghirardelli’s life would have been uncomfortable, and increasingly so. “It’s slow. It happens over time,” says Mehra. People with hypothyroidism have trouble sleeping and difficulty regulating their body temperature; they become depressed and find it hard to think, and later become sedentary, and unable to exercise. It can be life threatening, but only in the very long term. Ghirardelli, for her part, is known to have lived to the ripe age of 63.

Da Vinci, a man of science, might have realized that his subject was ill, though it’s impossible to know. What is clear is that he deliberately depicted her with all her strange and compelling imperfections, which is perhaps the reason why the “Mona Lisa” has captivated onlookers for over five centuries.

“He was an incredibly accurate artist,” Mehra says. “I would call him a forensic artist. Almost a scientific artist. He didn’t just look at art and show what he thought would be eye-pleasing. He wanted to depict the form as it happens naturally, and that was his greatness.”