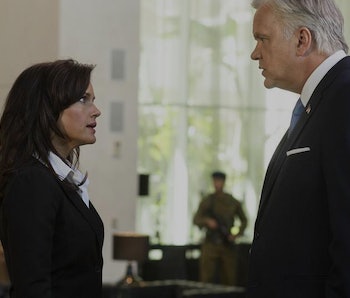 The most overused and misused Karl Marx quote from “The Eighteenth Brumaire of Louis Napoleon,” a screed against the capitalist state, is the one about how “History repeats… first as tragedy, then as farce.” In actuality, the quote is supposed to be about how historical archetypes seem to appear and reappear so that, as time passes, the masses find themselves turning to increasingly comical leaders with increasingly simplified ideas. The question that anyone watching The Brink has to ask is whether or not the show exists in some farcical future or simply reflects our overwhelmingly stupid present.

This week’s episode, “Tweet, Tweet, Tweet,” sees our man in Kabul, Jack Black, deepening the international crisis by making a mistake second only in proportion to starting a land war in Asia: giving teenage girls access to the Internet. The schoolgirls he quasi-rescued from insurgent forces are comfortably ensconced in the U.S. Embassy, tearing up Twitter, where they refer to him as “Uncle Creepy,” and attract the attention of strongman Umair Zaman, who vows to affect their return. The embassy is then locked down, much to the joy of Ambassador John LaRoquette, who should be in everything and, on this show, is looking forward to riding a seven-headed dragon to the kingdom in the sky.

This plot line is — to a slightly lesser degree than the one about the fighter pilots captured by swinging British black market art dealers — absolutely ludicrous. It is, in fact, so ludicrous that if it didn’t caricature U.S. foreign policy it wouldn’t be able to stand on its punch drunk legs. And that’s where we, the viewers, find ourselves in a bit of difficulty because The Brink feels like a farce but, as it takes on scope, doesn’t feel like a farce of any specific ideology or situation. The show is a withering take on the moral ambiguity of America’s engagement with the international community, but that’s such a big, old target that no one should get points for a bullseye.

Though some of the show’s anger — and it does feel angry — is aimed at the sort of people that climb the Washington ladder, the broader take on American fecklessness isn’t pinned to any political persuasion. Based on the sex with minorities and Tim Robbins being Tim Robbins, it’s fair to conclude that Walter Larson, the closest thing we’ve got to a hero, is of a more liberal bent. But is the leering Secretary of Defense a right-wing hawk? Is the president a Democrat? We’ve got no idea and, because of that, we get a monolithic joke at the expense of America.

And, sure, our actual foreign policy has devolved into something just short of incoherence since the supposed end of the Cold War, but farces are supposed to be more pointed than this. Who is The Brink making fun of and, if it’s just about international relations, how have we gotten this far without any Chinese or Russian characters? How is there not a character representing the eminently mockable United Nations?

The Brink is manic and it’s mania earns a few laughs, but it is beginning to feel like a YouTube comment on our democracy, poorly thought out and tossed off in a fit of pique. The fact that the show has been renewed should encourage its creators to pick fights they can actually win, rather than launching bombs from a safe distance. That’s supposed to be what Larson is against.

More like this
Science
Sep. 24, 2022
Is a fact always true? A philosopher explains how to spot the difference
By Peter Vickers and The Conversation
Science
Sep. 23, 2022
Ancient DNA reveals the shocking scale of Anglo-Saxon migration
By Jennifer Walter
Culture
Sep. 23, 2022
You need to watch the best legal thriller of the century before it leaves HBO Max next week
By David Grossman
Related Tags
Share: