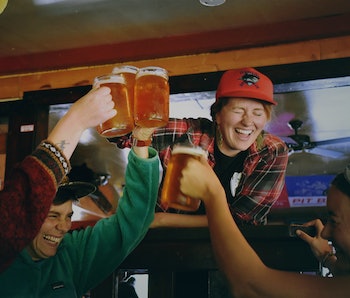 With Labor Day just around the corner, you may be considering drinking your way through the last weekend of summer — and dealing with the dry mouth and headaches on Tuesday morning. But the effects of booze can last longer than just the physical pain you experience the morning after a binge, new research shows.

Psychologists at the University of Bath, in England, found that people continue to suffer the same cognitive impairments seen when they’re drunk even after there’s no alcohol left in their bloodstream. That means that you’re likely to have poorer attention, memory and psychomotor skills such as coordination and speed compared to if you were sober. The research paper, “A Systematic Review of the Next‐Day Effects of Heavy Alcohol Consumption on Cognitive Performance,” was published this month in the journal Addiction.

Sally Adams, a psychologist studying alcohol and tobacco use at Bath and a senior author of the research paper, tells Inverse that the effects of booze last longer than most people think.

“Most people wait to drive or attend work when they believe that all the alcohol has left their system,” Adams says. “Our research suggests that even when alcohol has left your system you may still be impaired in cognitive processes required for everyday activities such as working and driving.”

One reason why alcohol affects our cognitive abilities so severely is because of how it is metabolized by the body, she says. When you drink alcohol, your liver immediately starts breaking it down with the help of an enzyme called alcohol dehydrogenase. This enzyme breaks down the alcohol into a chemical called acetaldehyde, that is actually more toxic than alcohol itself. Studies show that it’s the main culprit for liver damage and cancer associated with alcohol abuse.

Fortunately, acetaldehyde is quickly broken down into acetic acid radicals, which can then be removed from the body. But our body can only metabolize a certain amount of alcohol — usually around two drinks per hour, depending on your size. Beyond that, the acetaldehyde starts accumulating, and it may have the effects as still being intoxicated on your cognition, Adams says.

Add to that the fact that alcohol acts like a diuretic, and you lose more liquid after drinking than you consume. This dehydrating effect causes essential minerals and nutrients like sodium, potassium and magnesium to be flushed out. And they aren’t replaced immediately. It takes a while for your body — and your brain — to replenish the nutrients it needs for normal functioning.

Most companies have clear policies regarding showing up drunk, but few cover the next-day effects of drinking, Adams says. Employees who are hungover may still not have the cognitive function to do complicated tasks. It might be worth revising safety guidelines for certain workplaces. And maybe you should consider taking a “sick day.”

Unfortunately, there’s currently no credible cure for hangovers. The only way to avoid a hangover and its effects is to drink in moderation, Adams says. And until we know more about the true health and economic effects of indulging, it’s important to take it easy with weekend bingeing.

Background and aims: Studies examining the next‐day cognitive effects of heavy alcohol consumption have produced mixed findings, which may reflect inconsistencies in definitions of ‘hangover’. Recent consensus has defined hangover as “mental and physical symptoms, experienced the day after a single episode of heavy drinking, starting when blood alcohol concentration (BAC) approaches zero”. In light of this, we aimed to review the literature systematically to evaluate and estimate mean effect sizes of the next‐day effects of heavy alcohol consumption on cognition.

More like this
Mind and Body
6.16.2022 6:16 PM
Beer might actually improve gut health, study finds
By Elana Spivack
Science
6.28.2022 10:00 AM
How are drugs absorbed in the body? The science of medicine, explained
By Tom Anchordoquy and The Conversation
Science
6.27.2022 11:00 AM
Letting your cat go outside could spread “life-threatening” parasites — new research
By Amy Wilson, Scott Wilson and The Conversation
Related Tags
Share: