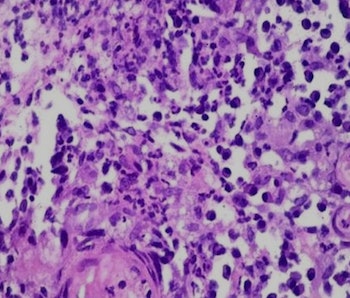 A sexually transmitted disease that has lurked out of public view for a number of years has reared its ugly head in England. Donovanosis, which can cause “large, foul smelling ulcers around the groin” is the stuff of nightmares, and is very rarely diagnosed in the UK. But as gross as it is, this disease is really small fish in a much bigger, scarier pond.

Donovanosis is caused by the bacteria Klebsiella granulomatis which gained its independence from after Calymmatobacterium granulomatis when researchers reported that is was genetically distinct enough to warrant its own species. When an individual is infected by Klebsiella granulomatis it can cause red bumps around the anus, or large sores that health agencies that the CDC refers to as “beefy red ulcers.” But while they might look painful, the CDC also reports that the disease tends to be painless, at least at first. However as the disease progresses, those ulcers can engulf genetailia. So it’s not exactly eating the flesh away, as much as it is just causing large ulcers to erupt.

“Donovanosis itself can be treated with antibiotics, [and] time is of the essence,” Shamir Patel, a pharmacist for the British online pharmacy Chemist-4-U.com told the Liverpool Echo. “Any delay could cause the flesh around the genitals to literally rot away.”

This week, the Liverpool Echo also reported a case of Donovanosis in an unnamed woman in Southport, England — a bit strange, seeing as the Donovanosis tends to affect men more than women. Regardless, the case was brought to light because Patel’s group, Chemist-4-U.com had submitted a freedom of fnformation request as part of their investigation into STD reporting and awareness in Britain.

Donovanosis is incredibly rare outside of what a BMJ report calls certain “hotspots” in particular Papua New Guinea, South Africa, Australia, and parts of India and Brazil. And even on a global scale, Donovanosis is far less wide-reaching and threatening than other STDs like Clamydia. For instance the CDC estimates that there are 2.86 million cases of Clamydia annually, the majority of which go unreported. So if you’re looking to worry about an STD worry about that one, because it turns out the Donovanosis as grisly as it is, is something that most public health systems should be able to tackle.

For example, the UK National Guidelines for the Management of Donovanosis points out that Australia has done a particularly good job of managing Donovanosis.

In 1995, a report was released showing that a population of aboriginal islanders in the remote Torres Strait area of Australia, were disproportionately effected by the disease — there were 115 cases that year. In response, Australia created a National Donovanosis Eradication Advisory Committee in 2001, and through disease reporting schemes and antibiotic treatment, reduced the amount of cases in the population to only five by 2004. In 2011, the Kirby Institute of Disease Eradication reported that there were no cases of Donovanosis, and only one in 2012.

So it seems that Donovanosis, as frightening as it may seem, can actually be controlled quite well. The World Health Organization points out that it responds well to antibiotics, but the issue is that it isn’t on the radar of countries outside these previously defined hotspots. That said, this is a a good opportunity for the rest of the world to take a look at stigmas surrounding STD reporting, because the best way to spread a disease, “flesh-eating” or not, is to keep quiet about it.

More like this
Mind and Body
Jan. 30, 2023
Swapping Cigarettes for Vaping May Help You Quit — but There’s a Catch
By Elana Spivack
Science
Feb. 5, 2023
The Plague Is Still Here — And It Could Infect Your Cat
By Tara Yarlagadda
Science
21 hours ago
Millions of People Are at Risk of This Rare Climate Change Threat — Study
By Tara Yarlagadda
LEARN SOMETHING NEW EVERY DAY.
Related Tags
Share: