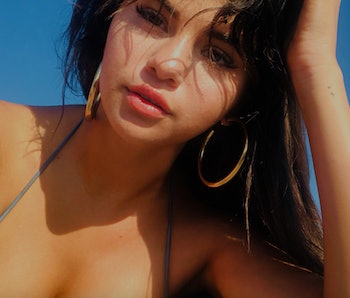 Millions of people every day maneuver themselves into the perfect combination of angle and lighting to take the Perfect Selfie, and while these moments of feeling cute, might delete later are a sufficient excuse for most, researchers have other questions. Selfies, they say, aren’t mere pouty lips. They may be the newest evidence of why sexualization manifests in society.

According to a study released Tuesday in the Proceedings of the National Academy of Sciences, what drives sexualized imagery isn’t gender oppression, but economic environment. A team of Australian researchers say their research suggests that sexy selfies happen most often in places that are economically unequal and in places where women are younger and poorer. This doesn’t mean that only young, poor women are taking selfies, but it does mean that selfies are proliferating in areas where incomes are unequal. In these places, the researchers reason, selfies are possibly used as competitive tools, allowing some to scale the social hierarchy.

“Selfies say much less about the women and girls who take them than the nature of the economies they live in,” study co-author and University of New South Wales researcher Khandis Blake, Ph.D., tells Inverse. “We find no evidence of sexualization being a product of unequal power relations between men and women. Instead, we find that sexualization happens most often in environments which incentivize social climbing.”

“We find that sexualization happens most often in environments which incentivize social climbing.”

Blake says you can think of it this way: In places where men possess a disproportionate share of wealth, there are gains to be had by attracting a man at the top. The idea is that sexy selfies could help a person do this. But it’s not just about women going after a man: Being seen as hot generally brings you social capital, and that capital makes you the “envy of fellow female competitors” or makes you actual capital as an Instagram influencer.

Blake is an evolutionary social psychologist with a gender studies background and has long suspected that the argument that female sexualization arises because of gender power imbalances was missing something.

“I thought that the whole world of Botox, dermal fillers, fitspiration, thinness, and sexiness was much more about women competing with other women than it was about men needing wives who drink green smoothies — or about about men oppressing women into being sexual objects whose value is only their bodies,” says Blake.

So she and her team decided to track selfies online to see which environments they occurred in most often. Overall, they examined 68,562 “sexualized self-portrait photographs” shared publicly on Twitter and Instagram, pinpointed them to location, and examined data on gender and income equality in those locations. They found that within 5,567 cities and 1,622 counties in the United States, areas with relatively more sexy selfies were more economically unequal but not more gender oppressive. When they shifted the focus to 112 other countries, a complementary pattern emerged.

The researchers also determined that these areas — those that are economically unequal but not gender-oppressive — were also the places where sales in good and services designed to enhance female physical beauty were higher. While it can’t be said whether the women posting selfies are the same as those buying these services, the correlation between beauty and cash is still there.

In a commentary on this study published Tuesday, University of California, Davis professor of anthropology Monique Borgerhoff Mulder, Ph.D. points out that while one could conclude from the study that heterosexual women might be motivated to post selfies in an attempt to catch the attention of a man, from the data “we cannot tell whether women are using social media to freely provide this sexualized service, whether they are merely responding to male demand, or indeed whether the sexes have arrived at an equilibrium — in other words, whether high levels of sexualized female imagery are driven by female agency of male demand.”

The question here is: How does a sexy selfie economy fit into a growing conversation about the benefits of selfies? While some may say selfies are mere vanity, others argue that they are tools for empowerment. It stands to reason that some women might just take selfies because it feels good to celebrate oneself, not because they’re trying to compete.

Blake argues that those two thoughts can exist in the same space. Her findings counter a dominant school of thought in psychology which argues that “sexualization is inherently disempowering to women and results from cultures which devalue them.” And while she finds that’s not true, she also reasons that sexualization can be something that women can use intentionally to compete and achieve a goal of some sort.

“It’s important to remember that rightly or wrongly, in today’s environment looking sexy can generate large returns and trying to maximize these is rational, even adaptive,” says Blake.

This doesn’t mean that Blake thinks selfies should stop. Instead, she thinks there’s an overemphasis on the negative aspects and an underemphasis on the benefits of being appearance-focused.

“So when you see a young woman primping and preening herself in front of her phone camera, don’t think of her succumbing to the patriarchy,” says Blake. “Our research shows she’s probably feeling empowered and in control, trying to out-do her female competitors, and maximize her lot in life just like everyone else.”

More like this
Gaming
15 hours ago
17 years ago, Yakuza reinvented video game masculinity
By Cian Maher
Innovation
7.2.2022 6:00 PM
Are self-driving cars safe? The tipping point rests on a psychological illusion
By Jean-François Bonnefon and The Reader
Mind and Body
7.1.2022 8:00 PM
How to spot a liar using a classic mathematical trick
By Dorje C Brody and The Conversation
Related Tags
Share: