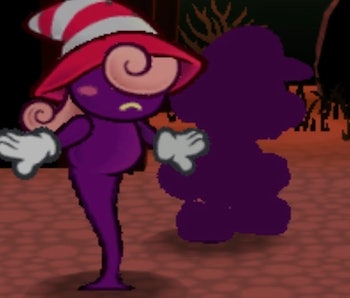 Paper Mario is a bit like the unsung hero of the Nintendo video game universe. Despite being a reliable source of entertainment for 18 years, the series has never claimed its spot in the Super Smash Bros. franchise. But it doesn’t have to be that way, and one Nintendo fan has a plan for bringing the Paper Mario series into the Smash Bros. Ultimate roster in a very interesting way.

Welcome to Roster Dreams, a special series from Inverse discussing some of the best fan-suggested additions to the Super Smash Bros. Ultimate roster.

Reddit user Glittertripper combined their love of Paper Mario and Super Smash Bros into an Ultimate moveset for one specific character: Vivian. Introduced in the 2004 title, Paper Mario: The Thousand-Year Door, Vivian is a magical Shadow Siren who defects from the villainous group to join Mario and allies in the game.

This moveset leans heavily into Vivian’s magical abilities: including Fiery Jinx, Veil, and Infatuate from the actual Paper Mario game. Those moves translate easily to Smash Bros. Ultimate. Neutral B becomes Fiery Jinx (a long-range explosion attack) and Down B becomes Infatuate, which stuns enemies and breaks their shields. This mockup also introduces a new Shadow Warp move for Up B, which looks like a useful trick for recoveries.

Overall, this version of Vivian seems like a lot of fun to play with — though all those complicated moves may require a little extra practice to master. Of course, there’s no guarantee Nintendo will ever add a Paper Mario character to Smash, and if it does happen we’ll probably get something simple like Paper Mario himself to start. But just maybe, if we’re lucky, the company will try something a little more interesting and go with Vivian instead.

More like this
Gaming
7.3.2022 4:00 PM
You need to play Sega's most underrated platformer on Nintendo Switch ASAP
By David Grossman
Gaming
7.1.2022 5:00 PM
15 years later, the smartest shooter ever made still holds up
By Joseph Yaden
Gaming
6.30.2022 5:06 PM
Everything you need to know about the hyped Metroid Prime remaster
By Joseph Yaden
Share: