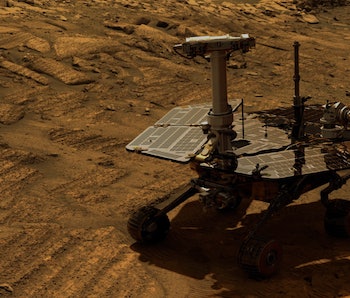 It wasn’t alien life or severe temperatures that shut down NASA’s Mars Opportunity Rover, but rather a huge dust storm. The rover continues to sleep due to the dust blocking out the sun that Opportunity needs for power. It’s been two months and NASA has an update of what it has planned to get in contact with the rover.

In a blog post on the agency’s website, NASA explained Opportunity is currently in “low-power fault” mode, or in hibernation, and conserving its battery until it can recharge from the sun. If it stays off for too long or does not receive a signal from Earth within a certain period, it can begin the process of trying to communicate with Earth. If it does begin communication with NASA, it may take multiple sessions before it will get up and start roving again. Even if it does power-up, Opportunity is “not out of the woods yet.”

Due to its prolonged hibernation, Opportunity may not have the same battery capacity it had before, which means it can store less energy. Having less power available not only limits Opportunity’s regular functions, but it can also be a big problem when it needs to turn on its heaters during the winter and causing a brownout due to insufficient power, which could be disastrous for the rover.

The dust storm responsible for Opportunity’s hibernation started on June 10 and was big enough to encircle all of Mars. The amount of sunlight reaching the surface is called “tau,” and to begin charging up again, the rover needs a tau of less than 2.0. Normally, the tau is at 0.5, but at the time of the storm, it jumped to 10.8. The latest update from NASA showed tau went as low as 2.1 last week, but then jumped back up to 2.5.

NASA’s Opportunity Rover team will continue to try communicating with it as the dust around the planet begins to settle. They’re optimistic that the rover will be up and running again to hopefully make its 15th anniversary on Mars in January.

More like this
Science
5.17.2022 8:45 PM
NASA announces the end of its Marsquake-hunting lander
By Doris Elín Urrutia
Science
5.13.2022 6:00 PM
Once a year, we get closer to NASA's Voyagers — here's why
By Elizabeth Howell
Science
5.14.2022 1:00 PM
NASA's ailing Mars lander captures the biggest Marsquake yet
By Jeff Nagle
Related Tags
Share: