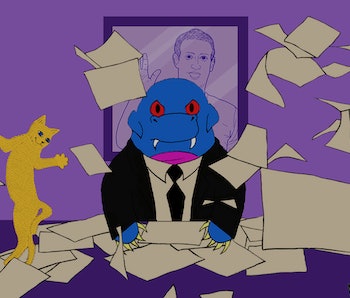 You’ve probably noticed the same Facebook advertisements lurking in the corner of your screen or even embedded right into your Newsfeed. It’s no coincidence, the social media giant is feeding you ads it thinks you’ll find relevant based on an algorithmically curated interest profile. This hidden portrait of yourself is buried in the Settings menu, but now thanks to three Mozilla fellows it’s one click away.

The trio developed Fuzzify.me, a browser extension that lets Facebook users quickly access their targeted ad settings and clear them all so those eerily specific digital commercials will stop following you around. Joana Varonne, one of the widget’s creators, tells Inverse that this project was first and foremost about revealing how tech companies use massive amounts of data that consumers hand over.

“The main ideas behind [Fuuzify.me] was to give more transparency about how the Facebook profiling factory works, how it is ‘selling us’ to advertisers and test if the tools they provide for user control actually work,” explains Varonne, who is also the founder of the Brazilian think tank Coding Rights.

The extension is available for FireFox and Chrome and serves as an easily accessible digest for information that Facebook has buried. Once installed, users can click on the Fuuzify.me symbol at the top-right corner of their browser to see a list of ads currently being served to them and an explanation as to why they’re seeing these ads.

The “Clean your ads preferences now” button purges the “interests” that Facebook has amassed for accounts after years of clicking, liking, and sharing. Doing this through Facebook can take hours, as the site forces users to delete one interest at a time. Fuuzify has automated the otherwise grueling process.

Aside from giving people more power over the data Facebook has on them, Varonne explained that this project also revealed how Facebook’s interests algorithm stereotypes women, by peppering their feed with weight loss and dating app ads.

“It was also interesting, and kind of sad, to compare vintage ads and current ads and be able to point out how old sexist thoughts about gender roles are now embedded in the algorithms,” she says.

After large-scale data breaches, like Cambridge Analytica or Equifax, it’s clear that third-party data collection isn’t as secure as people once thought. For this reason, it’s paramount that users take charge and are aware of what companies have immediate access to their personal information.

Fuuzify.me is an example of how people can take control over their data on a massive online platform.

“I’m happy that we are [getting] people’s attention and giving [them] a tool to observe the phenomena of targeted ads, experiment with user controls settings, and question the platform as a whole,” says Verona. “We hacked the logic of targeted ads to talk about privacy and are giving people a tool to play with the algorithm. I think it’s exciting.”