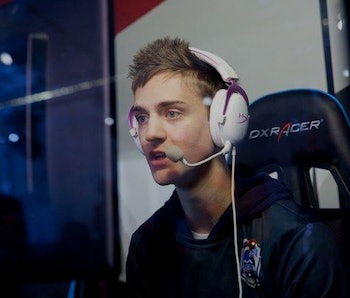 The most popular Fortnite: Battle Royale player on Twitch, Tyler “Ninja” Blevins, rose to the top among professional gamers to become an internet star after playing with Drake and Chance the Rapper, but in the past few days, his remarks have sparked controversy over his stance on playing with female players.

Blevins attended Samsung’s Unpacked Event on August 9, where Epic Games announced Fortnite: Battle Royale would start beta testing on Android devices. There, while talking to gaming news site Polygon, Blevins said that he doesn’t stream with female gamers. “If I have one conversation with one female streamer where we’re playing with one another, and even if there’s a hint of flirting, that is going to be taken and going to be put on every single video and be clickbait forever,” he said at the time. Monday, Blevins tweeted a statement to explain himself further.

“While I understand some people have implied my views mean I have something against playing with women, I want to make clear the issue I’m addressing is online harassment, and my attempt to minimize it from our life,” Blevins wrote. “It is something that affects all streamers, especially ones that make their relationships public. I wanted to bring attention to this issue and my comments should be characterized as anything beyond that.”

Blevins continues to say that he recently celebrated his one year anniversary with his wife, fellow Twitch streamer Jessica “JGhosty” Blevins, adding that the two are fans of other streamers including Amanda “CurvyLlama” Defrance, Halie Atisuto, and Julia TV.

With more than 10 million Twitch subscribers, Blevins’ influence in the gaming community is huge, but it appears he wants to keep his personal life drama-free.

Last week’s Samsung event was also a key moment for Epic. The developer announced the Fortnite: Battle Royale Android beta would finally launch, starting with Samsung’s Galaxy devices. Even more invites went out on Monday for non-Samsung phones and tablets.