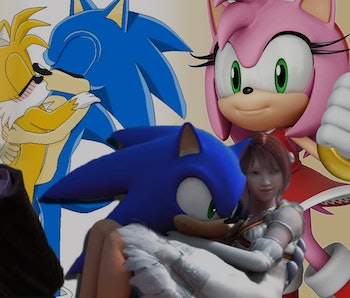 Ben Schwartz of Parks and Recreation and BB-8 fame will voice Sonic the Hedgehog in the upcoming live-action movie about Sega’s blue speedster, and it’s a fitting casting choice. But now that fans know who will be playing Sonic, they can turn their attention to the next-biggest question, at least among every Sonic fan with a DeviantArt account:

Who is Sonic gonna kiss?

Variety broke the news of Schwartz’s casting on Thursday, writing that the actor would be joining Jim Carrey, who will play Dr. Robotnik, and James Marsden and Tika Sumpter, who will the play the human leads.

However, Variety — perhaps because it’s a largely respectable trade magazine — had no insights on what sort of smooching Sonic might get up to in the film, which is set to premiere on November 15, 2019. That’s a shame, because Sonic’s love life is one of the most facinating aspects of Sonic fandom. Here are some guesses as to who Schwartz’s Sonic might swap spit with.

Amy Rose, a pink hedgehog who swings a mean hammer, has a longstanding crush on Sonic throughout the various Sonic games, cartoons, and comics. Though Sonic generally hasn’t reciprocated as much as Amy would like, this is probably the closest thing the series has to a “canon” pairing, and it would make sense if Sonic and Amy shared a smooch in a high-stakes, live-action movie. However, there’s no confirmation that Amy will be in the movie, so this isn’t guaranteed.

In the infamous 2006 Sonic the Hedgehog game, which boasted a wildly complex and self-important plot, Sonic kisses a realistic human woman with normal human proportions. In the upcoming Sonic movie, James Marsden plays Tom Wachowski, a normal human sheriff who teams up with Sonic, a giant anthropomorphic blue hedgehog. That means it’s entirely possible that Sonic could lock lips with a real actor rather than a CGI animal compatriot. Maybe female lead Tika Sumpter should read her contract carefully?

Before we were debating whether Twitter should ban Nazis or not, before arguments about how “.GIF” is pronounced, there was one question that took the internet by storm: Do Sonic and Tails kiss? It’s a question that has become both a weird internet meme and the topic of too many fanfictions to count. Are Sonic and his best buddy Tails just friends, or something more? Something passionate?

The Sonic the Hedgehog movie could make it official once and for all. Do it, you cowards.

More like this
Gaming
Jan. 28, 2023
The most daring Yakuza game is also the franchise’s best
By Willa Rowe
Gaming
Jan. 27, 2023
Like a Dragon: Ishin blends Yakuza's weirdo humor with stylish samurai flair
By Jen Glennon
Culture
Jan. 25, 2023
Hansel & Gretel: Witch Hunters is a flashback to the strange excesses of 2013
By Mark Hill
LEARN SOMETHING NEW EVERY DAY.
Share: