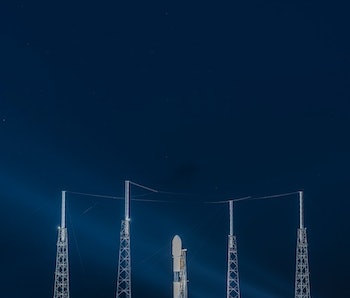 SpaceX released stunning images on Wednesday of the previous day’s Falcon 9 Block 5 launch, the first time ever that the company has relaunched the new reusable rocket design. The Block 5 has been described by SpaceX officials as a culmination of everything the company knows about reusing rockets, and the trailblazing technology lit up the Florida sky in an incredible early morning spectacle.

The mission sent the Merah Putih geostationary commercial communications satellite into orbit, enabling PT Telekom Indonesia to provide service to the country and others for 15 or more years. It launched from the Cape Canaveral Air Force Station in Florida at 1:18 a.m. Eastern and the mission is the fourth time SpaceX has launched a “Block 5” design — but only the first time such a rocket has flown twice. The first “Block 5” mission on May 11 sent into orbit the Bangabandhu Satellite-1, Bangladesh’s first geostationary communications satellite.

The Block 5 is part of SpaceX’s aim to recuperate the costs associated with building a Falcon 9, estimated at $62 million. While the first stage booster only comprises one component, its estimated $46.5 million cost makes reusing a highly lucrative strategy. CEO Elon Musk compared in February the current strategy of disposing rockets as “like where one aircraft company has reusable aircraft and all the other aircraft companies had aircraft that were single use, and you’d sort of parachute out at your destination and the plane would crash land somewhere. Crazy at it sounds, that’s how the rocket business works.”

The Block 5 rocket contains improvements like new heat shields, and will help SpaceX improve relaunch efficiency. SpaceX aims to use each Falcon 9 rocket 10 times with only inspections between launches, and up to 100 times with more intense repairs. Musk told reporters prior to the first Block 5 mission that he was aiming to demonstrate two orbital launches of the same Block 5 in just 24 hours, reaching the goal no later than next year.

SpaceX’s next launch is currently scheduled for no earlier than August 17, when the company will launch the Telstar 18 Vantage communications satellite from the Cape Canaveral Air Force Station.

With reusability kicking into overdrive, the Block 5 bodes well for SpaceX’s aim to send the “BFR” rocket to Mars by 2022. The video below shows the first Block 5 mission from May: