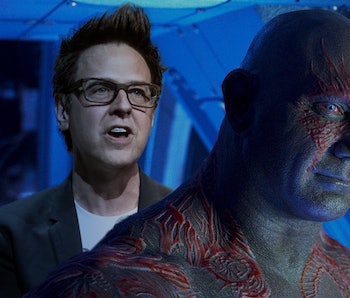 Drax isn’t the sharpest member of the Guardians of the Galaxy, but the actor who plays him, Dave Bautista, totally gets what’s really going on — and he isn’t afraid to call bullshit. In the wake of Disney’s controversial firing of James Gunn after alt-right agitators brought up the directors old offensive tweets, Bautista has been pretty explicit in his opposition to Disney’s decision to appease the Pizzagate crowd. On Monday, he said working for Disney was “nauseating,” and later threatened to quit if Guardians of the Galaxy Vol. 3 doesn’t use Gunn’s script.

Even though the entire main cast of the Guardians films signed an open letter asking Disney to reinstate Gunn after Disney fired the director due to flak the alt-right was giving the company for Gunn’s old jokes about pedophilia, Bautista has been the most outspoken from the start. On July 22, just two days after Gunn’s firing, Bautista called the entire ordeal “a #cybernazi attack that succeeded.”

He’s right, in the sense that the alt-right campaigners who circulated Gunn’s tweets were looking for a scalp rather than acting in good faith. Disney fired Gunn in response (even though it already knew about Gunn’s old tweets and didn’t take issue with them until now) in an act of either misguided optics-fixing or craven cowardice. Take your pick.

That’s why, on Monday, Bautista responded to a question on Twitter by saying he would “do what I’m legally obligated to do” if Disney doesn’t reinstate the director for Vol. 3, but that “GotG w/o @JamesGunn just isn’t GOTG.” He then voiced his displeasure with Disney in a way that the House of Mouse probably didn’t love.

“Its also pretty nauseating to work for someone who’d empower a smear campaign by fascists #cybernazis.” he wrote. “That’s just how I feel.”

As he alluded to in his Tweet, Bautista is under contract, meaning he would face legal troubles if he just walked away from Vol. 3 over Gunn’s firing. However, if Disney ditches Gunn’s script, Bautista says he’d be willing to endure the legal consequences.

“Where I’m at right now is that if [Marvel] don’t use that script, then I’m going to ask them to release me from my contract, cut me out or recast me,” Bautista told Shortlist in a Monday interview. “I’d be doing James a disservice if I didn’t.”

“Nobody’s defending his tweets, but this was a smear campaign on a good man,” he elaborated. “I spoke to Chris Pratt the day after it happened and he’s a bit religious so he wanted time to pray and figure it out, but I was more like: fuck this. This is bullshit. James is one of the kindest, most decent people I’ve met.”

It’s looking like Disney isn’t going to reverse course and rehire Gunn, though it’s unclear if the company plans to use his Vol. 3 script or not. Still, Bautista is being pretty daring in his condemnation of Disney.

As deplorable as Gunn’s jokes were, they are not what this saga is about. It’s about a culture war — an extension of the same one we saw with Gamergate — and the targeted weaponization of faux outrage. Bautista is savvy enough to see that and brave enough to tell it like it is.

We often joke about how Spider-Man actor Tom Holland can’t help himself from spoiling Avengers movies, but Bautista is probably causing top Disney executives much, much more grief right now.