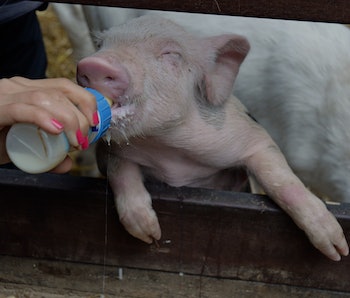 It takes a special set of mental gymnastics to bite into a succulent, juicy lamb chop and not feel a twinge of guilt. Sure, that perfectly grilled meat is delicious, but what about the psychological and emotional costs of eating a defenseless animal? When it comes to eating the flesh of our fellow living beings, we omnivores tend to shove aside ethical concerns in favor of that sweet, sweet meat. But a team of psychologists says it may only take a little bit of information to make us question our choices. In the case of meat-eating women who are reminded of how cute baby animals are, that questioning can actually result in appetite loss.

In a paper published May 3 in the journal Anthrozoös, psychologists presented evidence that women temporarily lose a bit of their appetite when a picture of a meat dish is paired with a picture of a baby animal that the meat comes from. For instance, when women were shown a picture of a lamb chop and a lamb, they quickly — but temporarily — lost some of their desire for meat. Psychologists found that, according to the test subjects’ cuteness ratings of the animals, there was a significant interaction between how cute they found the animal and how much they wanted to eat it. The same thing was not true for men, though.

“We found that both men and women find baby farmed animals to be cute and vulnerable, and experience feelings of tenderness and warmth toward them,” wrote the study’s authors, led by Jared Piazza, Ph.D., a psychology lecturer at Lancaster University in the United Kingdom. “Further, results indicate that female omnivores exhibit a temporary reduction in their appetite toward meat sourced from baby animals, while the results are less conclusive for male omnivores. Feeling tenderness toward a baby animal appears to be an oppositional force on appetite for meat for many people, especially women.”

In general, both men and women have been found to share a phenomenon called “baby schema,” in which babylike facial features — small noses, big eyes, round faces, big heads, et cetera — make us think an animal is cute, which triggers a caretaking instinct. Researchers on the topic of baby schema say the caretaking instinct it triggers has “the evolutionary function of enhancing offspring survival.”

“The emotional and motivating effects of baby features are not limited to human infants,” write the study’s authors, and researchers have indeed found that baby schema extends to non-human animals like kittens. Unlike kittens, though, we usually think of farmed animals as being protein vehicles, animals that are raised for the purpose of ending up on our dinner plates. In this study, the researchers used kangaroos, cows, pigs, and sheep, animals that are most often produced for food, not friendship. But this study’s results suggest that when people are reminded that their food comes from a living, cute, baby-like animal, they may be more inclined to pause and think.

So in this case, it makes a lot of sense that people might see animals as cute and subconsciously decide that they want to take care of them instead of biting them. But why the gender disparity?

The researchers did not dig deeply into why exactly women showed a much greater reduction in appetite than men did when they met baby versions of their meat, but the study’s authors point to previous research on the topic for clues. They point out that past studies have shown that women are more emotionally responsive to cute babies and display caretaking behavior in response to both human and non-human babies.

“Our findings are also in line with a large literature that has consistently uncovered greater ambivalence, and negative attitudes, toward meat among women, compared with men,” they write. “Our findings extend this literature by revealing that the impact baby animals have on people’s appetite for meat is more strongly observed among women.”

In general, though, this study highlights the very real disconnect illustrated by people’s love of cute animals and their eager desire to eat them, an area the study’s authors say merits further exploration:

“How some individuals are able to keep their affections and appetites separate remains an interesting and important topic for future research.”

More like this
Science
15 hours ago
One surprising insect could help solve farming’s pest problem
By Tara Yarlagadda
Science
14 hours ago
These fish don’t just make antifreeze — they bleed it
By Elana Spivack
Science
7 hours ago
Watch squealing dolphins hunt fish and snakes from their point of view
By Jennifer Walter
Related Tags
Share: