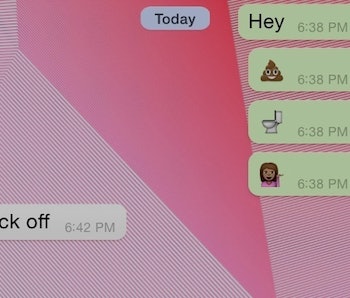 Our phones are covered in germs, yet we take them with us everywhere we go. We take them to bed, to dinner, to work, and, yes, even to the toilet. Hell, there’s a damn toilet emoji to better communicate the context of that latest text. But just because everyone’s doing it doesn’t mean it’s not gross.

Here’s a breakdown of how you’re picking up germs and passing them around.

Once you settle in and pull out your phone, you start transferring everything you touch onto your screen. That’s not necessarily the worst thing if you’re disciplined about keeping hands on your thighs and you don’t brace yourself against the stall walls, but you should know where your digits are.

Things get really hairy, however, once you’ve done your business: If you clean up and then sit around tweeting, you could be contaminating your phone with fecal matter. This can cause the spread of bacteria such as Salmonella and E. coli, according to Morrisette, both of which are potentially life-threatening.

Just because you’re done doesn’t mean you’re safe. Flushing can literally aerosolize everything that’s in the toilet, including intestine-attacking bacteria like C. difficile. The vaporized bugs can settle on everything, including your hands and phone, and infection may spread from hand-to-mouth contact or even by inhaling and swallowing. Put your gadgets in your pocket before hitting the lever.

How you wash your hands defines you. Are you going to be a good citizen and do it right (read: thoroughly, with soap and water, for at least 15 seconds), or are you going to be a jerk and carry all of your nasty-ass toilet germs out into the real world on your hands and on your phone? Washing up properly can get rid of even the most stubborn pathogens, like Cryptosporidium, norovirus, and C. difficile — though alcohol-based hand sanitizer will suffice in a pinch. And if you’re walking out with phone in hand, have some self respect and wipe it down with some alcohol too. Honestly, guys. Be better.

Think about how many of your co-workers you’ve seen emerge from the toilet, chuckling. If they’re not incredibly immature, the giggles are probably a product of the The Onion’s mobile site, which gets some serious traffic. According to Morrissette, if they didn’t wash their hands properly, there’s a chance they’ll have left enteric pathogens — such as norovirus or campylobacter — on the doorknob. These kinds of pathogens, which are usually spread by contaminated food, attack the gut and, if left untreated, can lead to serious diarrhea and vomiting. You haven’t even sat down yet, and you might already have these on your hands.

If you’re the one laughing, consider whether or not you touched your phone before washing your hands and again after. If so, you’re putting other people at risk. That’s a crappy thing to do.

More like this
Science
8.13.2022 2:00 PM
What makes mold edible? A food safety expert breaks it down
By Elana Spivack
Science
18 hours ago
'Gifted' dogs may share this one personality trait. Does your dog have it?
By Tara Yarlagadda
Science
12 hours ago
Do aliens exist? Jupiter’s moon Europa could hold the answer
By LAURENCE TOGNETTI and Universe Today
Related Tags
Share: