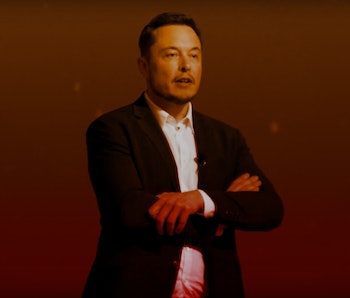 SpaceX’s latest iteration of the Falcon 9 is searing its way through the sky. On Wednesday, CEO Elon Musk shared an incredible image from last week’s launch in California, the third time the company sent its new Block 5 design into space. The new generation is designed for better reusability than ever before, paving the way for a more ambitious Mars mission.

The image shows the seventh Iridium mission, which launched from the Vandenberg Air Force Base in California on July 25, launching 10 satellites into space to join 55 others in orbit as part of a large-scale communications upgrade. Searing through the stratosphere in the below image is the Block 5, a design that Hans Koenigsmann, vice president of build and flight reliability at SpaceX, told reporters in April “basically summarizes all that we learned on reusability.” It’s a design that could help SpaceX reach its goal of using each rocket 10 times with inspections between launches, and 100 times with added refurbishments. This will help recover the estimated $62 million cost from rocket construction.

Last week’s launch was also iconic as it was only the second time ever that the company had deployed both its droneships at the same time. These ships are designed so the booster can land around the ocean at the end of the mission, but they take around seven to 10 days to deploy and return to base. The Iridium mission was just four days after the launch of the Telstar 19 Vantage communications satellite from the Cape Canaveral Air Force Station in Florida, meaning both Of Course I Still Love You and Just Read the Instructions were out at the same time.

Conditions for recovering the Iridium mission boost were rocky to say the least. John Insprucker, SpaceX principal integration engineer, said during the live webcast that the team was battling with “the worst conditions we’ve ever had for trying to get a first stage on a drone ship.” Less than eight minutes after launch, the Block 5 booster was safe and sound on the droneship. Mr Steven, a ship recently upgraded with a 0.9-acre net to catch the fairing component, unfortunately didn’t see action after the team deemed the conditions too rough.

These steps will help SpaceX reach its goal of sending the BFR to Mars as early as 2022. Musk clained at the South by Southwest festival in Austin, Texas, in March that the company will be able to perform hop tests as early as next year.

Alongside plans to go to Mars, the BFR is also positioned as offering an inter-Earth transit system to move from one side of the planet to the other in under an hour. Musk has already suggested this system could pair up well with the hyperloop.

More like this
Innovation
8.8.2022 10:00 AM
A wild new plane-train hybrid could whoosh you to your destination — if it can get off the ground
By Molly Glick
Entertainment
8.5.2022 12:30 PM
For All Mankind Season 3’s space mogul is better than Elon Musk — here's why
By Ryan Britt
Innovation
8.4.2022 11:30 AM
Look: 9 stunning images reveal a retired satellite's dynamic views of Earth
By Jennifer Walter
Related Tags
Share: