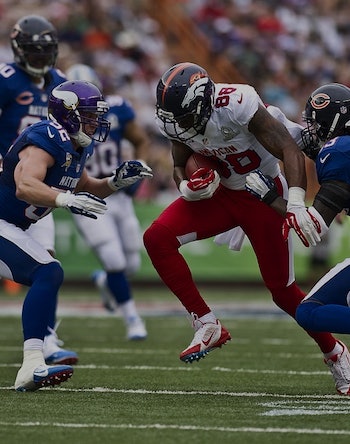 Scientists have identified another brain disorder associated with playing contact sports. As we learn more about the relationship between head injuries and long-term neurological issues, researchers continue to reveal new pieces of the puzzle, and while chronic traumatic encephalopathy gets a lot of attention for professional athletes’ health problems later in life, CTE isn’t the only condition that can come along with a career’s worth of head injuries. A new study sheds some light on another disease that can come into play: Lewy body disease.

In a paper published Wednesday in the Journal of Neuropathology & Experimental Neurology, a team of researchers at Boston University and the VA Boston Healthcare System presented evidence that contact sports like hockey and football are associated with an increased risk of Lewy body disease, a condition that can show up as dementia and Parkinson’s disease. They also found that LBD developed independently of CTE, which came as something of a surprise to the researchers involved.

Thor Stein, M.D., Ph.D., an assistant professor of pathology and laboratory medicine at Boston University and the corresponding author of the new paper, says that doctors long suspected that the same problems causing CTE could also be to blame for the neurological problems experienced by aging boxers, such as balance issues and Parkinson’s-like symptoms including tremors and shuffling gait.

“We thought that the CTE pathology may underlie some of the problems involved in movement, but also that the usual pathology that causes Parkinson’s disease might also be involved, and that’s Lewy body disease,” he tells Inverse, which is what motivated him and his colleagues to pursue this research. Since it’s well known that Alzheimer’s disease can change the pathology of LBD, Stein and his co-authors thought CTE might similarly alter the way that LBD shows up in patients. But they found that the picture was a bit more complicated.

Whereas CTE is thought to be caused by tangled proteins, called phosphorylated tau, LBD is caused by abnormal deposits of a brain protein called alpha-synuclein. And even though the two conditions can often occur in the same patient, the new study suggests that CTE doesn’t actually cause LBD.

To reach their conclusions, the study’s authors examined 694 brains from people belonging to three brain donation banks — 269 with a history of contact sports including football, ice hockey, boxing, soccer, rugby, and martial arts; 261 from Boston University’s Alzheimer Disease Center; and 164 from the brain bank of the Framingham Heart Study, a community-based aging cohort study. Many of the athletes had CTE, but there was a fairly small number of people with LBD.

They found that, while head injuries were indeed associated with a specific type of LBD in the brain’s cortex, they might have been wrong about CTE changing the way that LBD develops in the brain. Stein says that he and his colleagues initially hypothesized that playing contact sports and being exposed to many years of head impacts would be linked to the development of neocortical Lewy body disease.

“That was indeed the case, so we confirmed our hypothesis, at least in this subset of individuals,” he says. “But I think we were surprised because we also thought that the presence of the CTE pathology would influence this process and would change the distribution of Lewy body disease, or brain regions might be altered. And we didn’t really find evidence for that. There wasn’t a clear link between having CTE and the development of Lewy body disease. Really, the link was simply having these repetitive head impacts.”

In other words, the more years a person spends getting hit in the head playing sports, the more likely they are to develop LBD, regardless of whether they ever develop CTE. And this was true even for people who weren’t professional athletes.

Some of the people in the Framingham Heart Study had actually played contact sports in high school, college, and amateur leagues, which allowed the study’s authors to examine how casual athletes were affected by the trend they observed. They found that even these individuals showed that there is a positive correlation between years of contact sports and the development of LBD.

“You don’t need a lot of exposure to get this disease,” says Stein.

The researchers’ next steps will be to investigate this link further to identify how head injuries lead to LBD and whether there is some kind of blood test or another biomarker that can be used to identify the pathology before a person is dead. Part of this effort would include following a group of people for a long time before they die to help get a better idea of what the condition looks like in living people, says Stein, especially since the disease occurs in such small numbers.

“This is really just the beginning,” he says.