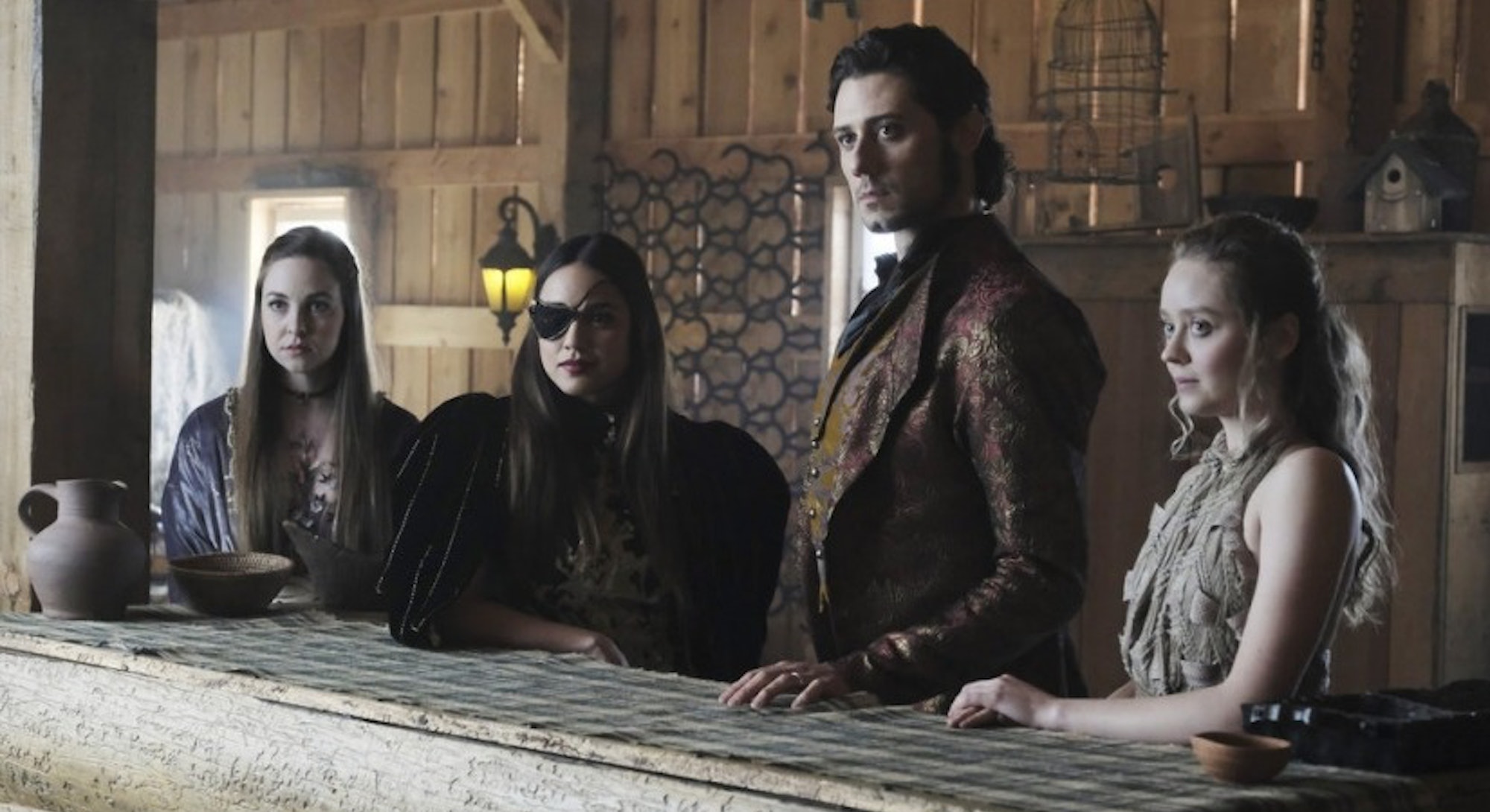 One of the best new romantic entanglements to emerge towards the end of The Magicians Season 3 involved magical bestiality. What began as an improvised punchline has since flourished into a prime example of the show’s fun-loving, tongue-in-cheek openmindedness. We’re talking, of course, about Rafe and Abigail, the story of a regal sloth and her loyal page.

The penultimate episode of Season 3 revealed that Abigail the talking sloth and her timid translator Rafe were in love. These two characters reliably deliver some of the shows weirdest and funniest comic relief. Abigail will screech incomprehensible words of violence, and the milquetoast Rafe will hesitantly explain precisely how a person ought to be ripped apart.

In a recent chat with Inverse, actor Sergio Osuna, who plays Rafe, spoke about all the fun he has on set as one-half of television’s weirdest oddball couple. And, as it turns out, Rafe and Abigail’s relationship originally “wasn’t in the script.”

“Summer Bishil improvised this little line where Margo says, ‘You really love that sloth, don’t you?’” actor Osuna tells Inverse. “The best twist about them in Season 3 was that theirs was more of a love relationship.”

Actress Summer Bishil, who plays High Queen Margo Hanson on The Magicians, improvised the line in a scene during “The Fillorian Candidate” when Rafe delivers the Fillorian election results. Because her character has an open-minded approach to the concerns of the millions of talking animals in the kingdom, they wrote her in on the ballots to make her the new High “King” of Fillory.

“None of us were brave enough to speak out in support of the cause, until you,” Rafe says to her, which prompted Bishil to deliver the line implying that his relationship to Abigail might be more than mere royal councilor and her page.

“This is Rafe’s dream job ever since he was a little kid — to be the translator for Abigail,” Osuna explained about his character’s motivation. “He has no plan B. This is what he wanted and he’s doing it. He doesn’t want to screw up.” That could explain why Rafe comes off as so timid and earnestly good-natured on the show, but perhaps also why he came to be infatuated with the animal that’s basically his boss.

Rafe and Abigail originally debuted in Season 2’s “The Flying Forest” and they’ve proven a reliable source of comedic relief on the show. Throughout their scenes together, Rafe refers to Abigail as “Her Royal Slowness” or “Her Sluggishness” or even “Flealessness.” The chuckle-worthy regal pet names are never-ending.

But beneath Abigail’s cute exterior lies an inner viciousness. In one Season 2 episode, the royale council discovers a traitor in their midst. Abigail’s bloodthirsty suggestion for the execution is frightening. Here’s Rafe’s translation: “Her Slowness suggests tying each of his limbs to a centaur, and as they stretch him, inch by inch, a fifth centaur sets the spike, if you will.”

Osuna fondly remembers working on that scene. “So I delivered it in a way that Rafe was a little bit scared about what he himself was saying,” Osuna explained. “At the time, Eliot and Margo were new kinds, so he was afraid. I love playing up his innocence and the comedic timing and relief of the character.”

Did Rafe always have a “thing” for sloths or did that romance evolve more naturally? That’s something we may never know, but Osuna theorized that Rafe might be drawn to Abigail’s more sadistic tendencies.

“Maybe Rafe kind of likes it?” Osuna wondered. “I think that Rafe does like that violent thought process that Abigail has. The unethical or unorthodox things that she likes. It’s more fun to think they’re complicit in a back-and-forth kind of S&M talk.” Together, Abigail and Rafe even used the Fillorian Castle Guards to run an escort service, so who knows what else they’re capable of as a power couple?

Despite Abigail’s bloodthirsty disposition, Osuna admits that the real-life sloth, named Sassy, is actually very sweet. “Sloths are such kind animals, so it’s very easy to play up the love and kindness.”

Osuna explained that Abigail’s real name is Sassy, and that she eats things like carrots, grapes, and zucchini cut up into little pieces. There are two sloth handlers usually on set and Osuna is the only actor that gets to interact with her. In between takes and sometimes during scenes, Osuna will sneak her a little snack. You can see Sassy reaching for him from time to time:

“What began as a working relationship became a friendship in real life,” Osuna explained. “Sassy remembered me from Season 2 into 3, so when we resumed production, we were right back where we left off.”

So what’s next for Rafe, Abigail, and the rest of Fillory now that their royal monarch Margo is stranded on Earth without her memory and no way to get back to her kingdom?

“I think this is going to be interesting because of where Season 3 left off,” Osuna said. “The last scene I shot was Rafe and council with Fen as acting high king with her filling in those shoes. She wanted to find her power.”

Osuna couldn’t divulge any specifics about The Magicians Season 4, but he did make a bit of a promise to loyal fans of the show. “Between the Intricacies of running Fillory and how it was left, audiences and people are going to be … Let’s just say it’s not going to disappoint.”

Season 4 of The Magicians is currently in production, right on par with where it was last year. If the production schedule matches up with Season 3’s, then we might be able to see more of Rafe and Abigail when the new season premieres in early 2019.