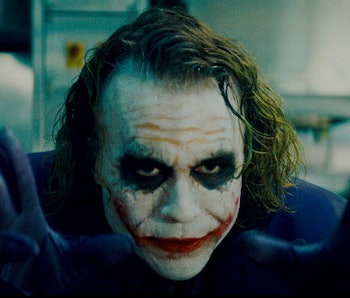 Looking back at The Dark Knight on its 10 year anniversary, Heath Ledger’s role as The Joker makes perfect sense. It’s the role he was born to play and the one we’ll always remember him for, but a decade earlier it was actually pretty controversial casting — and Batman fans weren’t happy about it.

Now, a decade later, the same fan communities are more vocal than ever, picking apart every casting rumor and even harassing the actors they don’t support. But in a roundtable discussion for The Hollywood Reporter, Jonathan Nolan (who co-wrote Dark Knight) explains why pushing back against fan criticism is exactly what made the movie so great.

When the Nolan brothers began working on their interpretation of The Joker for Dark Knight they knew it wouldn’t be easy. Jack Nicolson pretty much owned the character (at least in live-action films), but when Christopher Nolan cast Heath Ledger the reaction was almost unanimously negative.

As bad as that was, the fan reaction was even worse:

“And the fan community was… we were fucking pilloried for it. ‘This is a disaster. The worst casting decision ever made.’ And Chris just hunkered down and stuck to his guns and just kept moving along. Respectfully, it was a question of not giving the fans what they’re asking for but what they want, right. What they really want.”

Despite that reaction, Christopher Nolan refused to back down, and it clearly paid off. 10 years later, Heath Ledger is pretty much synonymous with The Joker, even if almost no one thought he was the right actor for the role at the time.

In the decade since The Dark Knight’s release, superhero movies have become an industry onto themselves. So it makes sense for Hollywood to play it safe when so much is on the line (not just one movie, but an entire cinematic universe). But if Marvel and DC want any of their films to be remembered 10 years from now, not just as yet another superhero sequel but as a cinematic classic, they need to take Nolan’s message to heart.

More like this
Culture
Jan. 23, 2023
5 years ago, DC released the best Batman movie you haven't seen
By Laura Kelly
Entertainment
4 hours ago
Where and how to watch the 2023 Oscar nominees
By Mónica Marie Zorrilla
Entertainment
Jan. 27, 2023
Onyx the Fortuitous and the Talisman of Souls is a cringe comedy as overlong as its title
By Andy Crump
LEARN SOMETHING NEW EVERY DAY.
Related Tags
Share: