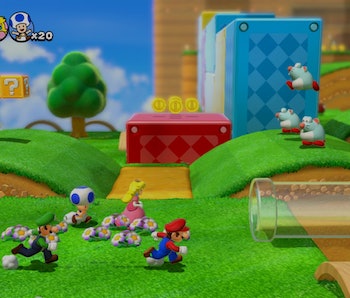 As far as we know, there are only three totally new stages coming to Super Smash Bros. Ultimate, each from a Nintendo Switch game.

The first is Moray Tower, from Splatoon. It’s set up as a single tower with multiple ramps leading to bottom that carry players automatically.

Next is Great Plateau Tower from The Legend of Zelda: Breath of the Wild, a single platform stage with an interesting added element. The tower features a covered roof that blocks players in. However, dealing enough damage can destroy the roof, opening up the stage and making it easier to launch your opponents offscreen.

Finally, there’s a mysterious New Donk City level from Super Mario Odyssey. We haven’t seen this stage in action yet, but we know that Pauline and her band will appear in the background.

Nintendo isn’t bringing back every single stage, but there’s still a lot to choose from. According to the Smash Bros. Wiki there are 79 returning stages to choose from. That includes classics like Princess Peach’s Castle, Great Bay, Pokémon Stadium, Onett, and Corneria. You’ll also get some newer additions like Umbra Clock Tower, Mario Circuit, and Town and City.

Super Smash Bros. Ultimate may offer over 80 stages, but that’s still not enough. On the Smash Bros. subreddit, one fan came up with a list of nine more options, and some of them are pretty great.

Reddit user SCDsco didn’t offer much elaboration beyond the image above, but it’s easy to let your imagination run wild. The Super Mario 3D World, for instance, could offer a cool backdrop to Nintendo’s 2D fighting game. Those transparent pipes would also add an interesting dynamic to the fight by transporting players across the stage.

The iconic Dueling Peaks from Zelda: Breath of the Wild could also make for a great Smash stage. It’s easy to imagine facing off against your enemies on a pair of mountaintops separated by a small, jumpable gap.

That Donkey Kong Country Tropical Freeze level also looks beautiful. As for the ammibos stage, we’re not sure what that would look like, but one fan suggests it could be a moving level similar to Poké Floats.