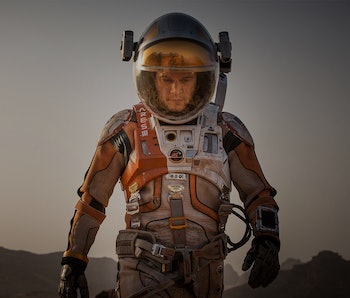 You have plenty of time to read Andy Weir’s The Martian before Ridley Scott and Matt Damon do their best to imitate this masterful bit of hard sci-fi storytelling this fall. Don’t just wait for the movie; read the book. Because no matter what Damon and Scott can pull off, it can’t possibly be as seamlessly captivating as Weir’s surprise hit novel.

Those prose, tho! Weir’s story, about a brilliant scientist and astronaut marooned on Mars after a storm separates him from his crew, therein leaving him for dead, is not some impenetrable aeronautics tome. There is plenty of heavy science, sure. But Weir’s protagonist, Mark Watney, is funny as hell. He is bright, sarcastic, searing, and pragmatic in the end. His personality keeps the jargon within reach for even the most blasé scientific mind. It also keeps the the narrative chugging along, making for a quick and engaging read. As Nick Catucci points out in his EW review, “The IT-Bro humor makes him [Watney] relatable.” Tom Shippley in the Wall Street Journal went so far as to call Weir’s work “The best pure sci-fi novel in years.”

Consider a brief moment in the novel where the NASA bigwigs back on Earth are desperate to recover Watney because, certainly, he is losing his mind:

“He’s stuck out there. He thinks he’s totally alone and that we all gave up on him. What kind of effect does that have on a man’s psychology?” He turned back to Venkat. “I wonder what he’s thinking right now.”

What about Watney’s jargon generation…

Or his consumer reporting game…

Each crewman had their own laptop. So I have six at my disposal. Rather, I had six. I now have five. I thought a laptop would be fine outside. It’s just electronics, right? It’ll keep warm enough to operate in the short term, and it doesn’t need air for anything. It died instantly. The screen went black before I was out of the airlock. Turns out the “L” in “LCD” stands for “Liquid.” I guess it either froze or boiled off. Maybe I’ll post a consumer review. “Brought product to surface of Mars. It stopped working. 0/10.”

This is sort of deadpan wit permeates the bleakest of circumstances in The Martian. It is what separates Weir’s writing from practically anyone practicing in this genre, where a “Robinson Crusoe on Mars” narrative would be approached with the zeal of Debbie Downer. Weir is an Asimov for Milennials.

And what’s better than following the story of a man stranded on another planet than reading the account? Seeing a film version will surely be a visceral aesthetic experience, but the story itself lends to the isolation of reading a novel. Reading about Watney’s plight puts the reader in his shoes rather than forcing her, as happens in too many a film adaptation, to join in with the characters back on Earth rooting for his safe return.

Weir’s ascent to the summit of bestseller land and subsequent film deal was not a linear journey. He went from publishing chapters of The Martian on his personal blog, to schlepping it on Amazon for (literally) a buck, to eventually picking up enough word-of-mouth to get the right people curious. The tenacity of such a thing befits that of his protagonist Watney.

The book is almost always better than the film, but not exclusively. In this case, reading Andy Weir’s novel will not necessarily be a more satisfying experience altogether; it will certainly be different, and it will tap into the solitary, half-nuts intimacy of the story, which was the novel’s ultimate intent.