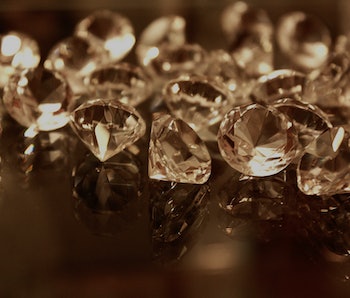 Adorning an ear or encircling a finger, a natural diamond is synonymous with luxury. The average cost of a diamond engagement ring is about $6,000, which is a lot of cash for a tightly bound piece of carbon. A new study in Geochemistry, Geophysics, Geosystems, however, points out that the value of diamonds would be very different if humans had better access to the subterranean world.

“Diamond is not a particularly rare mineral,” Roberta Rudnick, Ph.D., an earth science professor at the University of California, Santa Barbara, tells Inverse. Rudnick is part of the international team behind the new study.

She and her colleagues, brought together by the Cooperative Institute for Dynamic Earth Research (CIDER), discovered that there may be more than a quadrillion tons of diamonds scattered throughout the Earth, buried within ultra-deep slabs of rocks stretching between the planet’s crust and mantle. These ancient, immovable rocks are known as cratonic roots, and the diamonds stuck there lie 90 to 150 miles below the Earth’s surface.

Co-author and Harvard University postdoctoral fellow Li Zeng, Ph.D. explains to Inverse that during the 2016 CIDER workshop, the seismologists in the collaboration revealed evidence of a strange anomaly deep within the Earth. Seismologists study sound waves, or seismic activity, to study ground-shaking events like earthquakes, but that data also can help explain the contents of Earth’s interior. This team picked up on sound waves that were moving unusually quickly as they passed through cratons.

Originally, says Zeng, there were several possible explanations for this anomaly in seismic data, which led the team to build a three-dimensional model of the velocities of the seismic waves moving through the Earth’s major cratons. Introducing various virtual rocks into the model, they calculated how fast sound waves would move through these rocks.

Of all the original explanations, says Zeng, “the most fascinating one was the possibility of diamonds — that there exists a sweet spot in terms of pressure, temperature, and redox conditions for the growth and retainment of diamonds at that depth.” Sure enough, the data revealed that might be the case.

“With the experimental results in hand, I began calculating sound speeds expected for continental cratons,” MIT research scientist Ulrich Faul, Ph.D., tells Inverse. He compared the experimental results to measurements made on actual rocks in continents, and, through process of elimination, “ended up with diamonds as the only plausible and reasonable explanation as a solution to this puzzle.”

It turns out that only one type of rock can produce the same velocity that the seismologists measured: one that contains minor amounts of a coarse-grained rock called peridotite, includes a little bit of oceanic crust, and is one to two percent diamond. This means that there is at least 1,000 times more diamond in the cratons than scientists had previously estimated.

Faul says this discovery may affect our understanding of how continental cratons were assembled and stabilized, which is an important step in understanding some of the oldest parts of Earth. But, generally, the findings add support to older theories about Earth’s treasure trove of diamonds. While the findings may alter our view about diamond resources, says Rudnick, it doesn’t significantly alter our understanding of the planet. The idea that cratonic roots may contain two-percent diamond is within predictions based on global carbon estimates.

“While it is a higher concentration of diamonds than we would have expected based on the rocks that have come up from those depths, it is not more than the Earth can handle,” study co-author and geochemist Megan Duncan, Ph.D., tells Inverse. “We’re not adding lots of extra carbon to the Earth’s overall budget. It does have some interesting implications for ancient Earth processes, like subduction, and how it may or may not have changed with time.”

Unfortunately, we’re probably not going to get access to these diamonds with a drill anytime soon. The deepest hole ever drilled is about 7.5 miles deep — and these diamonds are more than 10 times deeper. “We’ll have to wait for them to come up the old-fashioned way,” says Duncan. “In kimberlites.”

Kimberlite pipes — igneous rock formed from the cooling of molten magma after deep-source volcanic eruptions — act as conveyor belts that move deep-rooted diamonds closer to the Earth’s surface. They are often found at the edges of cratonic roots, and most diamonds on the market come from kimberlite pipes that sample these regions of the mantle. Finding these pipes is what’s rare — not the diamonds themselves — so if a miner finds a pipe, then they can do business.