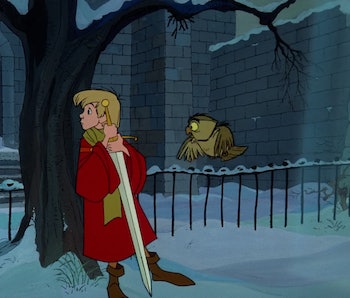 T.H. White’s 1938 British blockbuster “The Sword in the Stone” will return to the screen over 50 years after Disney animated it into the American firmament. The story of Arthur Pendragon’s youth will be rewritten for the screen by Bryan Cogman, who serves as the Game of Thrones story editor. In a sense, Cogman will be jumping the fence that separates adult fantasy from children’s fantasy. White’s book is seen as a precursor to the “Harry Potter,” “Redwall,” and “The Neverending Story” series, while the “Game of Thrones” novel probably owes more to “Henry VI.” But his narrative preoccupations make his coronation a bit less confounding. The man is a religious fanatic.

What Cogman believes about life, the universe, and everything is between him and his whatever, but the man puts faith at the center of his writing. The seven episodes Cogman is credited with writing for GoT are all profoundly preoccupied with honor and what’s going on upstairs. Cogman penned Tyrion’s quasi-coatroom rant against his family in “The Laws of Gods and Men” and Lord Beric Dondarrion’s unexpected rise from the dead in “Kissed by Fire.” Given that “The Sword in the Stone” is essentially a pagan story about king worship — [eat your heart out Hobbes](https://en.wikipedia.org/wiki/Leviathan_(book) — and the alignment of civil society and magic, this all tracks rather well.

Cogman isn’t exactly hiding his interests either. In an interview with ThinkProgress (yeah, confusing), he let it all hang out:

George’s exploration of religion is, without question, one of my favorite aspects of his story. It plays an increasingly significant role as the series goes on, not only in the lives of the various characters but in the “game” itself…. I would say that “gods” are very “active” in our own world, especially when it comes to those in the pursuit of power — you need only examine some of the rhetoric from the candidates in the current presidential race to find examples of that.

Is Disney about to dust off Historia Brittonum and Annales Cambriae then take a double shot of Welsh mythology? Well, come to think of it, maybe. Here’s hoping. “The Sword in the Stone” is a weird book to begin with — our hero turns into a goose in one version — so anything is possible, doubly so with Cogman scribbling away.