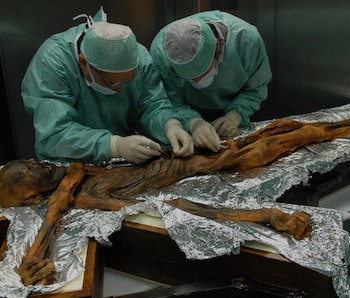 The oldest naturally preserved ice mummy, known tenderly as Ötzi, has changed perceptions of life in the Copper Age, from his fashion sense to his tattoos. The latest in-depth analysis of the mummy not only reveals Özti’s last meal but suggests that humans have been craving fatty foods for more than 5,000 years.

Ötzi was first discovered in 1991 after a group of German tourists found the well-preserved body of a man frozen in a glacier in the Ötztal Alps. Ötzi first wowed scientists with his impressive ensemble of a coat, belt, pair of leggings, and shoes all made of different types of leather. The sophisticated look — matched with his impressive 61 tattoos — were just some of the first reasons why Ötzi seemed like a cool guy. According to a study published in Current Biology on Thursday, scientists say that in addition to his fashion sense, Ötzi did a lot of food preparation and had a penchant for the greasy stuff.

“The Iceman seemed to have been fully aware that fat represents an excellent energy source,” says Albert Zink, the study’s co-author. “The high and cold environment is particularly challenging for the human physiology and requires optimal nutrient supply to avoid rapid starvation and energy loss.”

Still, the team of researchers, led by Frank Maixner at the Eurac Research Institute for Mummy Studies in Bolzano, Italy, found the amount of fatty food in Ötzi’s stomach surprising, where about half of the stomach contents were composed of adipose fat. The researchers say they combined classical microscopic and modern molecular approaches to understand Ötzi’s eating habits.

“By using a complementary multi-omics approach combined with microscopy, we reconstructed the Iceman’s last meal, showing that he has had a remarkably high proportion of fat in his diet, supplemented with wild meat from ibex and red deer, cereals from einkorn, and with traces of toxic bracken,” say Maixner.

The study not only reveals Ötzi’s taste for red meat and cereal but offers clues as to how people of the Copper Age prepared their food. Maixner’s analysis suggests Ötzi’s meat was possibly dried before eaten. Furthermore, the bracken, which is a genus of large ferns, may have been used wrap the food, wherein its toxic spores were ingested by accident.

“The stomach material was, compared to previously analyzed lower intestine samples, extraordinarily well preserved, and it also contained large amounts of unique biomolecules such as lipids, which opened new methodological opportunities to address our questions about Otzi’s diet,” Maixner says. The team intends to conduct further studies to reconstruct these ancient gut microbiomes to get a better sense of Ötzi’s preferences with meal-prep.

Ötzi’s stomach, despite being well-preserved, had never been studied to this extent before because scientists could not find his stomach, as it moved during the mummification process and was later discovered through CT scans. Maixner’s team plans to continue analyzing Ötzi for more insight and most likely more surprise. The stylish ice mummy has so many tattoos and ancient recipes it’s a wonder he doesn’t have an Instagram account.

More like this
Science
18 hours ago
Why is my cat scratching furniture? The answer might surprise you
By Tara Yarlagadda
Science
6.27.2022 11:00 AM
Letting your cat go outside could spread “life-threatening” parasites — new research
By Amy Wilson, Scott Wilson and The Conversation
Science
6.26.2022 11:00 PM
The powerhouse of the cell has a more complicated origin than we thought
By Viviane Callier and Knowable Magazine
Related Tags
Share: