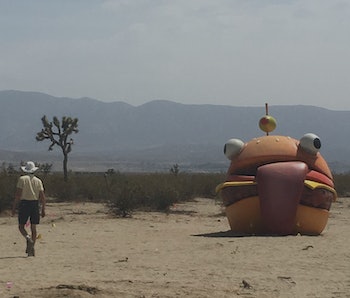 It’s already the biggest game in the world, but to kick off Fortnite Season 5, Epic Games is going even bigger, with a worldwide, clue-filled scavenger hunt. The company even made real-life version of its Durr Burger mascot (an in-game burger restaurant) and dropped it in the middle of the blistering Mojave desert, about hour from LA.

If you were thinking that Fortnite fans wouldn’t trek out to the desert in the middle of July for a chance to spot some Season 5 clues, you’d be wrong.

When Inverse visited Llano — an unincorporated town outside Palmdale, California now known to Fortnite fans as “Greasy Grove” — there were desolate mountains, Joshua trees, and throngs of eager fans.

People of all ages gathered on the brutally hot day, both from nearby towns along with places as far as Los Angeles and Huntington Beach to celebrate the game they loved and maybe even uncover some new information.

“This just means that the game is getting so big that they can do amazing things like bring the burger out into the desert,” Julian, age 10, tells Inverse, adding that he’s just excited to to see the Durr Burger come into the real world.

Brothers Cody and Andrew, 11 and 16, similarly tell Inverse that they “rage on that game.” They were ecstatic and lucky to be able to see the props from Fortnite come to life before their family moves to Arizona next week.

News of the “anomaly,” as several on-site “agents” (actors) described the giant burger mascot, spread quickly, and for many the allure was difficult to resist.

Angel, 17, who saw the post on Instagram and lives just 30 minutes from the burger, hopes its location means a new desert map is in the works for Fortnite’s next season — which would line up with recent leaks. He was accompanied by his mother, who saw the burger posted on Facebook and recognized that the location was nearby. She told him about it, though of course he already knew. Luckily, Angel’s mom was happy to drive him out.

Once Fortnite players arrived at the site there wasn’t much to do besides inspect clues and interrogate those agents, but even that didn’t seem to yield many answers. When one fan carefully explained to an agent that he had knowledge of “visitors,” a crack in the sky on Thursday, and a lightning strike, the agent simply deadpanned, “That’s not my department.” Bewildered and confused, the fan responded angrily, “I’m doing all this right!”

Another fan told an agent that there was something large and red in Ontario, like a tomato, presumably trying to speak in some sort of secret code, but the agent wasn’t buying it. “Isn’t that just the Canadian flag?” They responded. “There, solved that one.”

Aside from the giant burger and a few surly agents, the carefully assembled scene featured a police car with the license plate 7WKD070 and a yellow geiger counter typically used to measure radiation. Agents also handed out cards with phone numbers on them that when called reveal a set of coordinates in Paris, whatever that means. The entire scene felt like something out of an X-Files episode, and the existence of a nearby air base only solidified that vibe.

And just like an X-Files plotline, Epic’s viral marketing pop-up isn’t exactly forthcoming with clues. After visiting the Durr Burger ourselves we can’t say we have a better sense of what Fortnite Season 5 might hold, but that probably wasn’t the point. In leading its fans on a worldwide scavenger hunt with no clear answer, the company is proving an even more important point: Fortnite isn’t just a game. It’s a lifestyle.