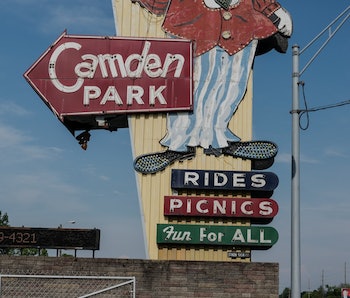 The upcoming Fallout 76 is set in the rolling hills and quirky roadside attractions of West Virginia, but some fans weren’t content with waiting until the open beta to venture out into the wasteland. So they decided to meet up on their own.

A group of Fallout fans local to West Virginia converged to Camden Park, one of the world’s oldest amusement park and a local attraction in Huntington, West Virginia, to celebrate the upcoming release of Fallout 76. Fans from all over the state and beyond came in cosplay and bought t-shirts that featured a 76 logo imposed on a graphic outline of West Virginia.

One of the attendees posted a photo of the gathering in front of the iconic Camden Park sign on the Fallout 76 subreddit, leaving any local Redditors who missed out on the event with a serious case of FOMO.

Another group photo posted on the Bethesda subreddit got a shoutout from the company’s Twitter account. According to the Redditor who shared the picture, about 400 people showed up to the event.

Event organizer Chris Barker, has been a fan of the series since Fallout 3. Barker himself isn’t actually from West Virginia, but lives right across the Big Sandy River in Kentucky.

“I actually live in Catlettsburg, just over the river, but I’m quickly converting over to West Virginia because of this game,” Barker told local news station WOWTK 13.

Attendees wearing Fallout cosplay received discounted admission into Camden Park, so I’m happy to report that everything went smoothly and people treated each other very kindly. I imagine this will change once the game goes live and those same attendees start virtually shooting each other in the face for Nuka-Cola caps.

More like this
Entertainment
8.3.2022 4:17 PM
Prey is an old school throwback that brings new life to the Predator series
By Eric Francisco
Entertainment
7.29.2022 3:00 PM
Amazon’s Paper Girls is the best new time-travel TV show since Dark
By Mónica Marie Zorrilla
Entertainment
7.27.2022 4:15 PM
Everything we know about Rick and Morty Season 6
By Corey Plante
Related Tags
Share: