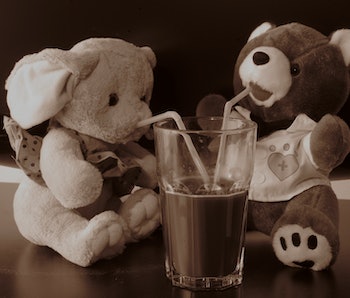 Starbucks, the global leader in burnt-tasting coffee and Paul McCartney Christmas songs, announced today that it would be phasing out its sales of plastic straws by 2020. With the pledge, the company joins a global movement — alongside Disney World, the Smithsonian Institute, and (as always) the Californians — to curb use of this disposable plastic product.

While it’s certainly fair to say that some people actually need straws for various medical reasons, there’s no doubt they are dramatically overused to the detriment of the planet. According to the Washington Post, Starbucks currently sells more than 1 billion straws a year.

There was a time when it could be credibly said that industrial plastic waste was more significant than our piddling bad habits as consumers, but those days are long over. For one thing, industry tends to deal with homogenous bulk plastic waste that’s not only easier for them to recycle, but tends to have very clear financial benefits when dealt with efficiently. The average person’s plastic use tends to be chaotic and emotional by comparison.

Consumers in the United States, Europe and Japan, for example are currently responsible for dumping something over 50 million tons of plastic crap each year according to one measurement while the BBC estimates that there’s currently somewhere around 7 billion tons of plastic waste out there in the world. Collectively, our cavalier slurping of refreshing bevs through plastic straws matters.

To help us cope with this brave new world, Starbucks says that they plan to roll out some kind of “strawless lid” made from biodegradable materials; it looks like some kind of infantilizing ‘sippy cup,’ but that’s fine. Unless you are in serious medical need of one, you currently look like no less of a child while sucking on your straw.

With over 28,000 locations and $22.4 billion in annual revenue, Starbucks is the largest retail enterprise to join the effort to phase out disposable plastic straws — a somewhat spontaneous movement that some observers attribute to a 2015 viral video. In that video, below, marine biologists in Coast Rica are shown painstakingly removing a gnarled, old straw caught in the nose of a bleeding and anguished sea turtle.

Several makers of plastic straws were approached for comment on this post, including one based in Florida named Straws and Stripes, and a Canadian firm called ACE, Absolute Custom Extrusions, Inc. Neither had a comment yet by press time, but if they do this post will be updated.