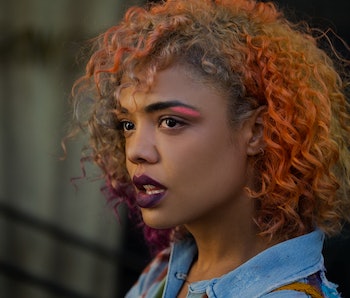 Boots Riley’s totally bonkers Sorry to Bother You doesn’t pack in in in in that many references, but one moment just the before the film’s third act may leave you a little confused. If you’re wondering just what the heck Tessa Thompson’s Detroit was reciting during her gallery exhibition performance you’ve come to the right place.

Mild spoilers follow for a scene in Sorry to Bother You.

That post-modern style is brazenly on display during a gallery exhibition performance in the latter half of the movie.

Detroit stands on-stage wearing a bikini made from black leather gloves with the bottom glove extending a middle finger up her stomach. While the audience pelts her with old cell phones, bullet casings, and water balloons full of sheep’s blood, she recites a totally random and utterly confusing movie quote:

“And in the end Eddie, you know what? You’re nothing but a misguided midget asshole with dreams of ruling the world … yeah also from Kew Gardens … and also getting by on my tits!”

The scene is from a 1985 film titled The Last Dragon, a cult classic martial arts musical in which a young man pursues martial arts mastery in New York City. “Eddie” refers to Eddie Arkadian, a villainous video arcade mogul in the movie. The speaker, Angela Viracco, is his wannabe rock star girlfriend who would do almost anything to be famous. In The Last Dragon, Eddie kidnaps Laura Charles (love interest to the hero Leroy Green) and tries to force her into playing Angela’s music video on her show. Leroy defends Laura with kung fu while Eddie tries to bring him down by enlisting the sinister Sho’nuff, the Shogun of Harlem.

Here’s the scene in which Angela realizes just how abusive Eddie is and walks out on him:

Why, of all scenes in the history of cinema, does Detroit recite this scene in Sorry to Bother You?

In The Last Dragon, Angela is portrayed as an air-headed wannabe who won’t ever succeed without Eddie’s evil machinations. He’s inherently abusive and selfish, which Angela initially tolerates in the pursuit of her dream. But in an honorable moment of growth, she stands up to him and sacrifices her dream by leaving, all because it’s the right thing to do.

The dynamic between Cassius and Detroit in Sorry to Bother You couldn’t be more different — and we wouldn’t dare say that Detroit’s entire performance is about him — but the inherent conflict remains the same: How far are these four people willing to go in order to achieve success? What evil things can capitalism drive people to do?

Cassius essentially sells his soul to the devils of capitalism to move up the economic ladder in Sorry to Bother You, which drives a wedge between him and Detroit. While Eddie Arkadian is totally irredeemable, maybe Detroit’s art can make Cassius come to his senses? But to know the answer to that question, you’ll have to watch the rest of Sorry to Bother You.

Sorry to Bother You is currently on limited release with a wider national release on July 13.