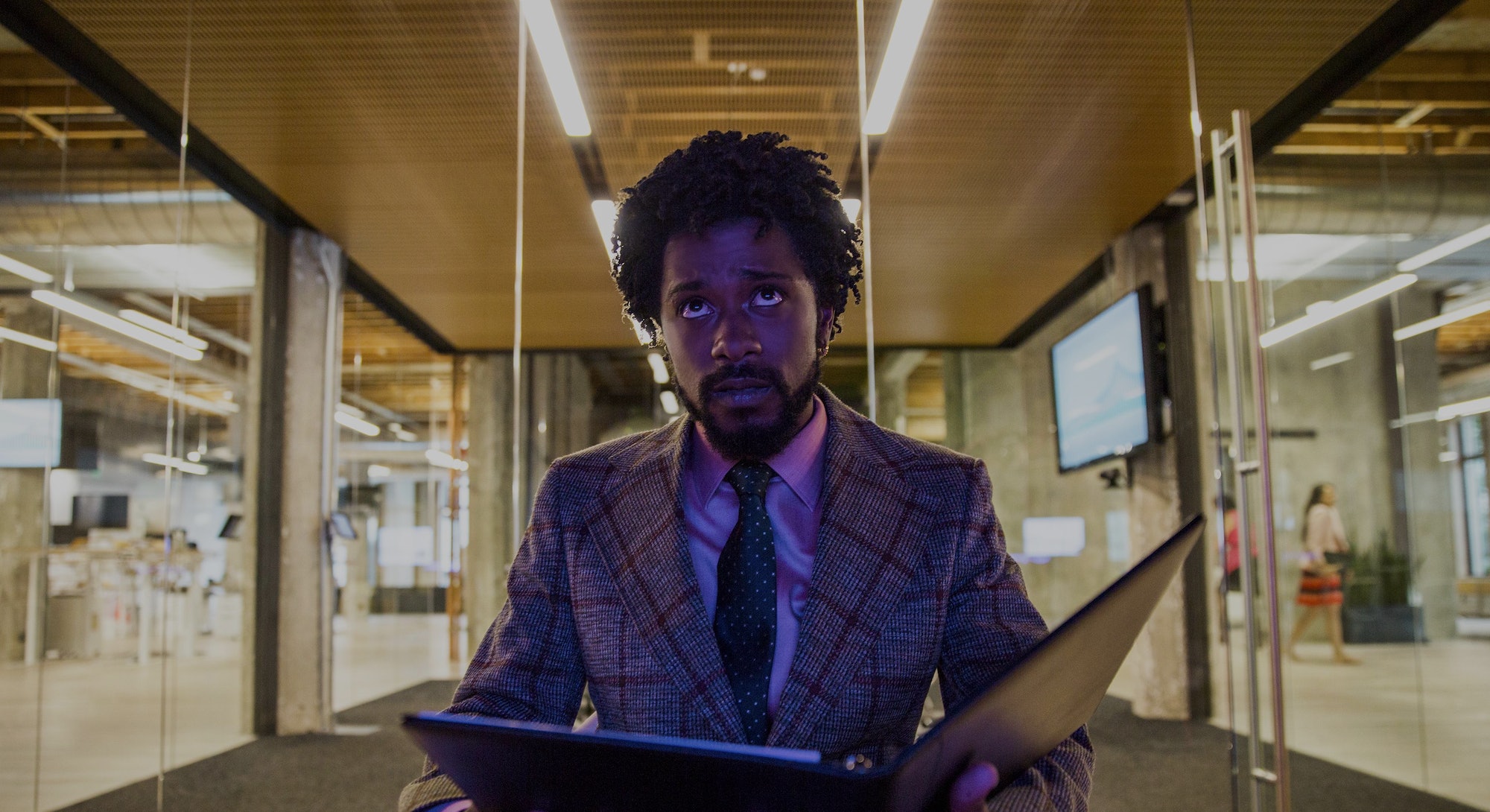 Boots Riley’s debut film, Sorry to Bother You, showcases a capitalist dystopia in which Cassius “Cash” Green (Lakeith Stanfield) becomes a telemarketer and uses his magical “white voice” to get ahead in an alt-reality Oakland, California. But the more success he achieves, the more the dark, macabre nature of the world is revealed. This bonkers world feels an awful lot like an alternate reality vibrating at a frequency just barely off-kilter from our own, and one way Sorry to Bother You distinguishes its otherworldly artistic vision is through colorful and varied costumes.

“It’s a story about selling your soul, about selling out,” the film’s costume designer Deirdra Govan tells Inverse. “Some of us do that every day until it’s inescapable.”

Each character’s costume reflects this predicament, whether it’s a character that’s lost their identity by selling their soul to capitalism or an artistic hero violently defying the system. “They each have their own way of expressing their message,” Govan says. “Fashion is very much about designing your own style, making it your own. In this alternate universe, there aren’t any rules.” Every outfit looks familiar, but with just a touch of cartoonish gonzo.

The protagonist Cash begins the movie unapologetically him: a hapless and unfulfilled man dwelling on the hopelessness of existence. His clothes are drab and wrinkled, and he walks hunched over and cramped like he’s trying not to be seen.

“For Cash, he’s probably had the same clothes since high school,” Govan says. “So like everything, they’re mostly thrifted finds.”

But after Cash discovers his seemingly magical talent for telemarketing, he’s propelled into a capitalist-fueled nightmare where “success” means dressing in the same stylish try-hard suits as his superiors, all while talking in the voice of Tobias Funke from Arrested Development. As his economic station changes, so does his style. When Cash becomes a “power caller,” his new supervisor is a nameless black man who only speaks in his own white voice.

“When Cassius sees the man with no name, he thinks, ‘Who’s that dude? Where’s he going?’ And he wants to know how to get there. He’s enthralled and wants to know more,” Govan says. “It’s what Cash thinks could be stylish for himself, but he’s still absolutely looking up to him.”

Cash’s costume for a long stretch of the movie emulates that of the man with no name, but his look is marred by a wound to his head that forces him to wear a makeshift bandage that looks like some kind of headband. Because it’s white with a red circle, it bizarrely conjures up the Japanese flag.

Cash’s upwards mobility eventually leads him to billionaire Steve Lift (Armie Hammer), an egomaniac billionaire who, according to Deirdra Govan, “takes cultural appropriation to the next level.” His weird style fuses together various cultures, but he only dabbles in a little bit of everything. And because he represents the caucasian 1 percent that’s essentially oppressing everyone here, his being a cultural dilettante is that much more offensive.

He casually wears an equestrian jacket and brandishes a riding crop at parties, a way of dramatizing how he figuratively rides on the backs of others to get ahead in life — but that outfit choice could also mean something more. Like the rest of the characters in this incredible ensemble, Steve Lift’s outfit elevates the character to a place that borders on the absurd.

Squeeze (Steven Yeun), one of Cash’s coworkers, is “utilitarian … minimalism in style,” according to Govan, with five shirts, three pairs of pants, and two pairs of shoes. Nothing too flashy, which makes sense considering he’s self-aware and travels around kickstarting unions for oppressed laborers.

“With Detroit, she stays true to the very end,” Govan explained. “Her look and style is very clear. She doesn’t deviate. She’s the one constant.”

Unlike Cash himself, who evolves and changes for better or for worse, Detroit is the heart and soul of Sorry to Bother You, remaining steadfast in her artistic sense of rebellion. She’s a sign-twirler by day and a revolutionary artist by night, and her feminist revolutionary wardrobe is unapologetically awesome. A pair of 3D-printed earrings that read “MURDER MURDER MURDER” and “KILL KILL KILL” are a real highlight.

“The story with the earrings is that Boots wrote the earrings within the script,” Govan explained. “They were based on a character, someone that he knew. Based on that style and where we wanted the character to go, this was her signature accessory.” Detroit has several pairs of earrings in this style, along with one pair that’s just two men dying on electric chairs. Govan explained that the style is reminiscent of door knockers and oversized earrings from the ‘80s and ‘90s.

“For me, as I designed the look, it came from me going to Parsons & Pratt design school,” Govan says. “I drew upon my own experience as a creative and the colleagues I went to school with. Graphic tees, interesting hair, experiments you do in your early ‘20s fashion-wise.”

That’s ultimately where Detroit’s look came from, but costuming the character was a collaborative effort between Govan, actress Tessa Thompson, and director Boots Riley.

In some cases, the script called for specific features. At other times, it was Deirdra Govan working with Tessa Thompson to solidify just what made Detroit unique.

“With Tessa, it was collaborative,” she says. “Early on, we’d trade images back and forth to build a foundation for who Detroit was. She got it right away and was totally unafraid.”

“Her graphic tees told the story,” Govan says, “and were meant to support what she’s wearing in every scene.”

At a New York City press event for Sorry to Bother you in June, Inverse spoke with the director and stars of the movie, and Tessa Thompson revealed that she brought some of her own fashion to the character of Detroit. “I really like this feminist-queer store called Otherwild so all these graphic tees I wear, I pitched to Boots: ‘Wouldn’t it be cool if she wore shirts like this?’”

Like Detroit’s earings, these shirts are nothing short of iconic. One simple t-shirt says “The Future Is Female Ejaculation,” a sex-positive spin on the popular “the future is female” slogan. Another, called the “Venus Tit Tee,” simple has two Venus symbols — usually used to indicate femininity — directly over the wearer’s chest.

“[Boots Riley] said that Detroit really uses every inch of herself as a canvas,” Thompson tells Inverse. “The first thing I did really to work on her was to sit in a chair for nine hours, strip my hair, and dye it.” Detroit has rainbow-colored hair throughout the film, making it a colorful expression of her style.

One of the film’s most shocking sequences costume-wise comes in the middle, when Detroit holds an exhibition at her art gallery. During a piece of performance art, she wears a bikini made of black gloves, with the bottoms showing a middle finger extended upward.

“It was written as a nude scene,” Govan says. “Tessa being so on-point and understanding, she knew that unnecessary nudity was not needed. So instead we went with something that could really support her performance art.”

That performance art encourages spectators to pepper her with old cell phones, bullet casings, and balloons full of sheep’s blood while she recites dialogue from The Last Dragon (1985). Stylistically, this one scene represents everything that Sorry to Bother You is about: the insane, radical style of Detroit raging against the capitalist establishment in an absurd, surreal way that Cash can barely comprehend.

So much of what each person wears in Sorry to Bother You is an expression of their identity, which seems an obvious truth for anyone in everyday life. But it comes off as so much more deliberate and artistic in a world where the spirit of its society is degrading into soulless capitalism.