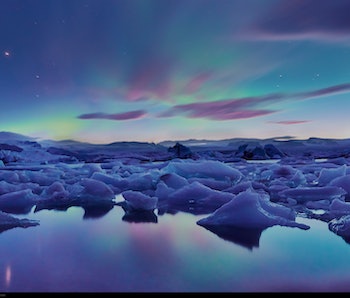 Over the past few months, biologists from Michigan to California have been running computer simulations day and night, trying to compile the largest evolutionary family tree of fish in the history of the field. Now, some 30,000 species of fish later, the results are published in Nature, and they’re calling a decade-old evolutionary assumption into question.

Biologists had long noticed a geographical pattern when it comes to how species form. Warm, tropical places tend to have far more varieties of species than cold, barren ones. “The difference in species diversity from the poles to the tropics is one of the ‘big patterns’ in biology,” explains lead study author and University of Michigan zoologist Daniel Rabosky, Ph.D. in an email to Inverse. “Even non-scientists know that the tropics are famous for their outstanding biological diversity.”

But Rabosky’s new paper, published Wednesday, has a new take on that old theory. The giant fish family tree suggests that it’s actually the coldest places on earth — not the tropical ones — that are hotbeds for new species.

Attempts to explain the biological diversity of the tropics have partially rested on the idea of a “latitude diversity gradient.” Basically, this means that there’s a hot spot for speciation on our planet right in the middle, straddling the equator. This, however, isn’t because the tropics are a great place to live.

Previous studies suggest that interactions between parasites, predators, and other threats to survival are stronger in the tropics, causing natural selection to work twice as fast to keep ahead of all these threats, says Rabosky. This, in turn, is what has led to the diversity of tropical fish species we all know and love. Biologists, who have always liked conceptual analogies, like to compare the process to a scene in Lewis Carroll’s Through the Looking Glass when Alice is challenged to a race against the Red Queen:

“A slow sort of country!” said the Queen. “Now, here, you see, it takes all the running you can do, to keep in the same place. If you want to get somewhere else, you must run at least twice as fast as that!”

From this somewhat eccentric analogy comes conventional wisdom in evolutionary biology: The red queen runs faster when it’s hot. That is, until now, because Rabosky’s research refutes all of this.

A New Model for Speciation

After constructing and analyzing the evolutionary tree, Rabosky and his team concluded that, over the past million years, fish living in polar waters actually formed new species twice as fast than those in tropical waters.

How did this team manage to find convincing evidence that contradicts centuries of evolutionary theory? They started by analyzing the available DNA data from around 5,000 species of the fish, and then they used other placement methods to estimate where the remaining fish should fit in the family tree. Running a statistical analysis program called BAMM on that “family tree” calculated how quickly species diverged from one another by comparing differences in their DNA: generally it can be assumed that the less DNA two species share, the more time has passed since they “diverged” from a single species into two separate ones.

“This tree is much larger than any previous study on fishes,” Rabosky says. “It enabled us to estimate the rates at which species form with much greater accuracy than previous studies.” His ground-breaking discovery, however, has a catch: There’s no good explanation for it yet.

Rabosky and his team still aren’t exactly sure why the rate of speciation is faster in the poles. He suggests that it could boil down to the idea that tough polar conditions — like glaciations and permanent ice cover — prompted a series of mass extinctions that opened the door for new species to form. He calls this a “rebound effect”.

“Perhaps extinction is wiping out species at high latitudes at a fast rate, but new species are forming to fill those ecological niches not too long after they are emptied out by extinction,” he explains.

Importantly, even though species in the poles diverged faster than those in lower latitudes, the tropical regions still had more diversity of species overall. Rabosky calls this “species richness,” which, until now, had always been explained by the assumption that species tended to diverge faster in the tropics. Now, Rabosky’s findings poke holes in this, but there’s no robust alternative explanation.

For now, it seems like the red queen is capable of running fast no matter what temperature it is. In fact, she might even run faster when it’s frigid outside.

More like this
Science
7.31.2022 1:00 PM
How do cats co-exist with each other? The answer may lie in their gut
By Tara Yarlagadda
Science
7.29.2022 10:00 AM
Which animals get Covid-19? A new database tracks cases around the world
By Jennifer Walter
Science
8.10.2022 3:27 PM
Climate change may push North America’s forests to a “tipping point”
By Tara Yarlagadda
Related Tags
Share: