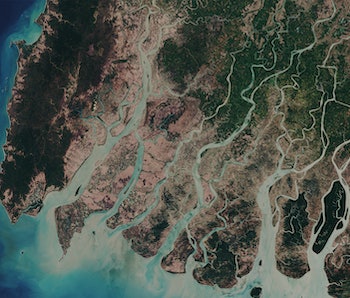 With over 1,300 satellites orbiting the Earth at any given time, you’d think we’d know everything about this planet that there is to know. But the age of exploration is far from over, reveal researchers in a new Science study published Thursday. Just as Hernando de Soto discovered the great Mississippi River in 1541, researchers at the University of North Carolina at Chapel Hill and Texas A&M University have charted a multitude of new rivers and streams, showing that we have 44 percent more of them than we ever thought.

The NASA-funded researchers, led by Tamlin Pavelsky, Ph.D., associate professor of global hydrology at UNC-Chapel Hill, weren’t in it for the glory of discovery. Rather, they were trying to figure out how much moving water there is on Earth because rivers and streams add a lot of carbon dioxide to the atmosphere, worsening the effects of climate change. It’s important to know where carbon goes, they suggest in the paper, because if we can’t keep track of it, we can’t quantify how bad our situation really is.

“Our new calculation helps scientists better assess how much carbon dioxide is moving from rivers and streams into the atmosphere each year,” said Pavelsky in a statement released Thursday.

Though much of the focus on climate change has focused on gaseous emissions into the atmosphere produced by burning fossil fuels, the carbon-containing pollution in our rivers and streams (like fertilizer and human and animal waste) can also release carbon dioxide into the air. This ‘outgassing’ from rivers and streams, the team writes, introduces a volume of carbon dioxide into the atmosphere “roughly equivalent to one fifth of combined emissions from fossil fuel combustion and cement production.”

Since the release of dissolved carbon dioxide into the air from rivers and streams occurs at the surface of the water, it’s important to know how much surface area is actually covered by moving water. So, the team turned to images taken by NASA’s Landsat satellite, which they used to create a database called Global River Widths from Landsat (GRWL), which contained over 58 million measurements of rivers over 30 meters wide.

Feeding the GRWL data into a statistical model built by Pavelsky, the team calculated the total surface of Earth covered by streams and rivers. Altogether, they measured roughly 773,000 square kilometers (298,457 square miles), about the same size as all of Italy or the Philippines. This is a lot more moving water — and a lot more room for carbon dioxide exchange — than we ever thought we had, which is problematic.

“We found that rivers and streams likely play a greater role in controlling land atmosphere fluxes than currently represented in global carbon budgets,” the team writes. The increased estimates of river surface area are “particularly pronounced” in the Arctic, they note, which already especially vulnerable to the effects of climate change.

The good news, other than the fact that we now have 44 percent more rivers than we thought we had, is that we can better keep track of how much carbon dioxide is actually releasing into the atmosphere as a result of human behavior. The bad news is that, with all these new rivers to account for, the amount of carbon dioxide actually being released is going to be even harder to mitigate.