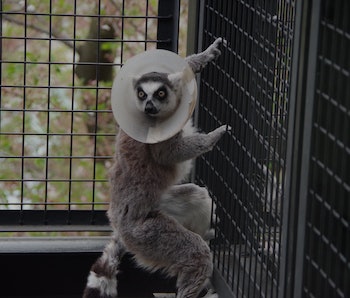 In May, when rapper Pusha T released one ferocious diss track after another brutally targeting a then-dormant Drake, he illustrated one fundamental biological behavior: Kick ‘em while they’re down. In nature, animals have ways of telling when their neighbors are weak, helping them identify their best opportunities for getting ahead. In a new Scientific Reports study, Duke University researchers show that some animals can literally smell weakness in their opponents.

The research team, led by evolutionary anthropologist Christine Drea, Ph.D., focused on weakness in ring-tailed lemurs — notoriously feisty animals that squirt out a pungent, musky odor to signal that they’re ready to mate. In their study, Drea and her team wanted to test the hypothesis that injured or “weak” lemurs give off different smells than their healthy counterparts, which is consistent with the belief that communication in the animal kingdom is generally “honest.”

Sure enough, the team’s analysis of data on 23 naturally injured animals, gathered over 10 years at the Duke Lemur Center in Durham, North Carolina, showed that injured lemurs smell “weak”. Drea explained to Inverse in an email why for lemurs, it’s evolutionarily beneficial to be able to produce a strong stench.

“[It’s] not the case that animals/humans would ‘want’ to signal that they’re weak,” Drea says. “In other words, it wouldn’t be something that would be ‘selected’ for evolutionarily. Instead, it’s the production of the ‘healthy’ signal that has benefits and is thus under selection.”

Weakness, the team shows, literally smells like a weakened version of the lemur’s regular scent. Testing of the chemical compounds in the scent secretions, swabbed from 23 injured and healthy animals, showed that the secretions from injured individuals had 10 percent fewer scent compounds than those from healthy ones — meaning the overall scent of injured animals was muted. The team explains that making scent signals takes up a lot of energy that injured animals aren’t able to spare.

“The point is that signals are costly to manufacture and when an animal is incapable of assuming that cost, that too is detectable by others,” says Drea.

In behavioral tests, it became clear that the smell of weakness was palpable to other lemurs, even though the researchers couldn’t detect any differences with their own noses. They studied this by taking secretions from the same animal both when it was injured and when it was healthy, then rubbing those scents on wooden rods.

When placed among male lemurs, the wooden rods marked with the “weak” smell got a lot more scrutiny than the healthy-smelling rods, illustrating what a Pusha T-like lemur might do in the wild: Sniff out the weak, then consider how to crush them. As if to manifest their Big Dick Energy, males that smelled the weak secretions replaced those odors with their own, using scent glands on the insides of their wrists.

Biological success comes down to any individual’s ability to get a mate and pass on its genes, and evolution of any species is driven by natural selection — the harsh reality that some individuals just won’t be able to mate. So, it’s not that surprising that mating season seems to exacerbate the lemur-odor phenomenon. When animals were ready to hook up, those that were injured gave off particularly weak scents.

Fortunately for the weakened lemurs and for Drake, there is another fundamental biological truth: This too shall pass. Injured lemurs don’t stay injured forever, and as such their natural odors don’t permanently signal weakness. Assuming they don’t get killed by their opponents or die in the meantime, there will come a point when injured male lemurs might regain the energy to produce the 200-300 chemical compounds they need to signal full virility, launching them firmly back into the game. With Scorpion, Drake’s new and somewhat well-received album, the Toronto rapper defies Pusha T to take another sniff.

More like this
Science
7.31.2022 1:00 PM
How do cats co-exist with each other? The answer may lie in their gut
By Tara Yarlagadda
Science
7.28.2022 6:00 PM
Meet the tiny critter that pollenates seaweed like a bee
By Jennifer Walter
Science
7.26.2022 10:00 AM
Trap-jaw ants are so powerful they should implode — scientists finally uncovered their secret
By Charles Q. Choi
Related Tags
Share: