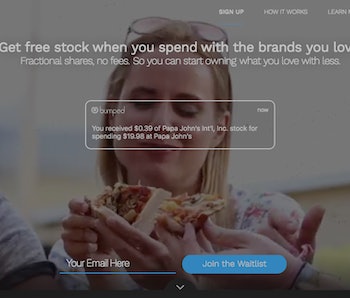 Building customer loyalty is more of a challenge in an age of price comparison tools, faceless transactions, and the endless options enabled by e-commerce. There’s not exactly a wildly compelling reason why one would buy their next desk lamp at Walmart over Amazon, unless, say, one was selling you the same lamp for cheaper.

This helps explain why the incentives to spend with a certain company are getting better. Credit cards that offer as much as 2.5% cash back on all of your money are now common place, to say nothing of the more high-end cards that offer an array of lux perks (if you meet the equally lux spending requirements).

And yet even these relatively generous schemes can be a wolf in sheep’s clothing. Let even a modest credit card balance revolve into the next month and you’ll certainly be paying your credit card issuer a lot more than whatever they’re paying to get you into that airport lounge. But a startup called Bumped thinks they can incentive loyalty by betting companies to offer something compelling than cash back or discounts: company stock that will actually appreciate.

“If a customer also happens to be a shareholder, they’re probably more likely to shop at Home Depot than Lowes,” Founder and CEO David Nelsen tells Inverse. “That doesn’t take rocket science.”

Stock ownership dropped from about 64 percent of households before the financial crisis to about 54 percent, according to Gallup. And yet few people would dispute the notion that acquiring assets whose value will grow over time is an essential part of creating wealth. By giving customers fractional shares in the publicly traded companies where they’re spending money already, Nelsen says his company can lower the barrier of entry.

“This is not something you could have done a few years ago,” Nelsen says. “Wall Street is much more willing to have millions of accounts with hundreds of dollars in them.”

The plan is to make money by convincing publicly traded companies to use Bumped as an incentive program. Bumped — a registered broker dealer — will link up to their customer’s cards to track their spending, and tally the amount of fractional shares customers earn with their purchase. Nelsen estimates that customers will make between 1-2 percent of their purchases back in the form of fractional shares on large purchases, with a slightly larger payout of around 5 percent on smaller purchases like your morning coffee.

The goal of the raise is to expand the team and recruit more publicly traded companies into the venture, but the current roster of companies includes some big names that don’t necessarily necessitate frivolous spending, including the grocer Kroger as well as big box stores like Target and Walgreens. Nelsen hopes to recruit the big utilities as well, so paying customers can begin earning equity by paying their electricity bills and heating bills as well.

Customers won’t exactly be accruing a fortune by gaining a few cents worth of stock with their morning coffee. But by picking up a few cents here and there, he estimates the accounts will earn a couple hundred dollars a year, which will appreciate even more if they hold on to their shares.

The company is still testing the product with friends and family for now, with plans to open up the public beta soon. You can get on the waitlist here.

More like this
Innovation
8.5.2022 11:00 AM
Alexa could diagnose Alzheimer’s and other brain conditions — should it?
By Joanna Thompson
Gaming
8.11.2022 1:30 PM
Overwatch 2 is ditching the game industry's worst feature
By Willa Rowe
Innovation
8.10.2022 9:00 AM
Scientists may have revealed the ancient secret behind China’s Bronze Age
By Sarah Wells
Related Tags
Share: