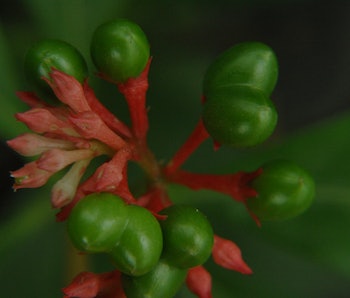 A team at the John Innes Centre in the UK finally has some insight into the origin of our favorite drugs — namely, caffeine, nicotine, and cocaine. These common compounds, all part of the alkaloid family, are traditionally extracted from plants, but for over 20 years, scientists have been wondering how the plants make them, which is an important thing to know if we want to make those compounds en masse in labs. The team behind the new paper figured it out by focusing on a plant alternately called Indian snakeroot or “devil pepper,” which is little known in the west but has been used as a tranquilizer in South and Southeast Asia for millennia.

Though Indian snakeroot (Rauvolfia serpentina) is one of the less famous members of the alkaloid-producing plant family (it’s often overshadowed by coca leaves and opium poppies), lead study author Thu Thuy Dang, Ph.D., praised it as a “medicinal treasure trove” in a statement released Monday. Indian snakeroot can synthesize about 150 different alkaloid chemicals, which is likely why it has a myriad of documented effects as an antihypertensive. Also, it apparently made British schizophrenic patients really chilled out when doctors injected them with one of its active ingredients, reserpine, in the ‘50s. We don’t inject people with it anymore, though, because we now know that reserpine is toxic in high quantities.

Dang noted in the release that her team’s discovery was sparked by a 20-year-old “clue in the literature.” There was some sense that this plant contained an enzyme that could spur a series of chemical reactions needed to synthesize these alkaloids biologically, but no one had identified it. After several rounds of experiments, they were able to isolate this enzyme, which they named the sarpagan bridge enzyme.

Isolating this enzyme was important, the study notes, because it solves a big problem we face when making alkaloid-based drugs (like the ones used to treat high blood pressure) synthetically. Scientists are pretty good at recreating the three-dimensional structure of individual alkaloid compounds, but one of the hardest features to replicate is a complicated bridge made between carbon atoms. Making these bridges is notoriously difficult for chemists, the team notes, but fortunately, this enzyme exists solely for the purpose of creating these bridges.

The researchers say this bridge-making enzyme, which is coded by a specific gene in the plant’s DNA, “provides entry” into several classes of alkaloids — enabling us to make them in the way nature intended. “We could use this enzyme to produce drugs in a much more elegant way than any synthetic chemist could,” said Jakob Franke, Ph.D., a contributing author and organic chemist at Leibniz Universität Hannover, in the release.

The researchers mention this enzyme has the potential to synthesize other alkaloids in plants — like tobacco — and use those to create medicines. It’s a decently big breakthrough, considering the most time-efficient way we’ve released plant-based alkaloids so far was to just grind them up and smoke them.