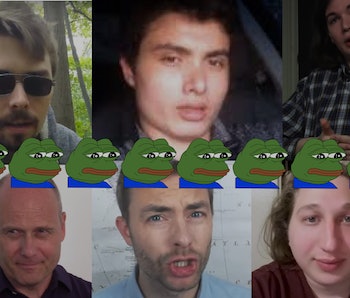 Could you ever date an incel? You know, the men on the internet who claim to be involuntarily celibate? I never considered that some women might answer ‘yes’ to that question, but that was before I saw #DateAnIncel, a self-proclaimed online matchmaking service says its purpose is to connect members of the “minority group” with “true love.”

The first time I discovered #DateAnIncel was through News.com’s Australia reporter Marnie O’Neill, who wrote an article on the supposed service. She says the website and corresponding Twitter account apparently isn’t “a joke or a hoax,” and actually reached out for a comment. So I did the same, by tweeting at the mysterious “Made in California” web developer (or team), asking for a follow back so I could DM them. My wish was their command, and a few days later I got the notification. But in the meantime, I signed up to find the incel of my dreams.

Little did I know that my curiosity of what love looks like for the notoriously misogynistic group would lead me down a rabbit hole of Chads and Beckys, Reddit banning, questionable morals, and Facebook stalking.

The Game Is Afoot

First things first: I am not actually interested in dating an incel. I don’t relish the thought of talking to someone who blames women for his inability to find a partner, plus I already have a girlfriend who would be pretty offended if I filled this form out seriously. But I had an ulterior motive: I wanted to understand how incels, who typically blame women for their inceldom, could still be interested in dating a someone from a group they resent so much.

This website promised that incels and their partners could experience loving, fruitful relationships, but I wasn’t convinced that could be possible. In fact, I was eager to hear from the source himself to explain exactly how that would work. But I didn’t think they’d be eager to play defense. So I tried to sleuth my way to their true identity.

One of the easiest ways to find someone’s IP address is to exchange email with them, and the application on #DateAnIncel claimed an “all-star matchmaker” would reach out within 2-3 working days.

So I played Stacy (what incels call women who are conventionally attractive and date ‘Chads,’ or hyper-masculine guys that don’t have issues finding a girlfriend) and filled out the form like I was looking for love in all the wrong places. After a few weeks, my inbox was bone-dry and my DMs were left on read, so I had to dig a little deeper.

With the Mission: Impossible theme playing in my head, I successfully tracked #DateAnIncel’s IP address using my iMac’s ping function. It showed that the owner’s location was in a small Pennsylvania town, not California like the website claimed. I won’t share the details of what I was able to find with real estate websites and Facebook’s advanced search settings, but I have reason to believe that the creator of #DateAnIncel is a twenty-something college graduate living in the Keystone State. I shot him a Facebook message along the lines of “sorry to bother, but would you happen to own an incel dating website domain?” I never heard back. So I moved on to my next target: incels in the market for a date.

For a crash course in inceldom, I typically would have turned to Reddit, where communities like /r/theredpill, a community where people discuss everything from pick-up tips to the latest Jordan Peterson video, run rampant.

That wasn’t possible due to the fact that Reddit banned /r/incels in November 2017. Popular posts on the subreddit included “all women are sluts” and “reasons why women are the embodiment of evil.”

So I went somewhere the light of Reddit and even its more insidious little brother, 4Chan, don’t shine: the official incels forum, incels.me.

The invels’ violently bigoted rhetoric first reached the mainstream thanks to one of its followers, then 22-year-old Elliot Rodger. If his name sounds familiar, it’s because on May 23, 2014, in Isla Vista, California, Elliot fatally stabbed his three male roommates, drove to the Alpha Phi sorority house near the University of California Santa Barbara, shot and killed six people, and then committed suicide in his 2008 BMW coupe.

Before his death, Elliot recorded and uploaded a YouTube video called “Elliot Rodger’s Retribution” where he detailed his plans to punish women for rejecting him and men who succeeded where he had apparently failed. He also wrote a 141-page manifesto blaming women for his virginity, having “never even kissed a girl” despite being an “ideal magnificent gentleman.” Elliot was an unabashed incel, and I was afraid to familiarize myself with the discussions that led him on a toxic rampage.

The Incels forum has nearly 41,000 threads with over 750,000 posts. It has 6,500 members now, with new ones joining every few minutes. One of them, reluctantly, was me. I quickly glanced past threads with categories like “SuicideFuel” and “Experiment” to search for #DateAnIncel. There were a few separate discussions about the website, that all came to one conclusion that surprised me: every single incel thought the form was for doxxing.

One incel, who has a YouTube channel with 26 subscribers, posted a video called “New Dating Site Aimed At InCels Is A TRAP.” I became its 243rd viewer. I was surprised that the vlogger, who has 23 videos about being an incel, showed his face and spoke without using a program to alter his voice. It was disturbing nonetheless to see a man openly discuss his misogynistic leanings without a shred of apology. I didn’t finish watching, since he didn’t have any proof that the site was for doxxing. No one did, not even incels.me’s site administrator, who emailed me a few curt responses to my questions.

He wouldn’t offer up a name or phone number, not that I was really expecting him to. He instead went by SergeantIncel, or Serge, for short. Serge wrote that even if #DateAnIncel didn’t open the doors to “doxxing, IP leakages, trolling and moking [sic],” he still wouldn’t use online dating to escape celibacy. And yet, Serge also told me that a so-called healthy relationship for an incel would look like any other partnership.

“The fact a person is incel doesn’t change anything regarding their expectations,” he wrote. Others disagreed. Forum user “ihatewomen94” asked “How could you actually think a (site) for ugly males in dating would be a real thing?” and “MyWaifuIsDead” states “Even with my low iq I know not to join up.”

Incels say they hate women, and there’s no denying the overtly dangerous sexism intertwined in their definition, but when I tried to understand what incels want from women, I realized that their violence is ultimately rooted in fear. The idea of dating, or of a service for their romantic interests, sent the forum into a tailspin. According to them, women only want to dox them, expose them, and mock them.

The incel community is mystifyingly close to self-realization. They understand that women despise them, and they nearly realize that it’s their own fault, but it’s not for the reasons that they think. Their self-proclaimed ugliness or low IQ aren’t the problems. Incels are so embroiled in their own victimization, that they blindly hate and push away their objects of desire while arguing that they deserve love, sex, and affection. I have enough reason to believe that #DateAnIncel was a hoax or a joke all along, but ultimately, what’s more interesting is the curtain separating incels from reality.

I don’t have the answer to the culture of toxic masculinity that sends young men into the incel spiral. But a culture that encourages blame, whether it’s directed toward immigrants, the “other side,” or women, tells its privileged ranks that they’re the oppressed ones. In the case of incels, who have largely found the freedom to openly propagate hateful rhetoric towards women online and in real life, that couldn’t be less true.

More like this
Culture
7.1.2022 9:00 PM
Male celibacy has evolutionary benefits — but not for the reasons you think
By Ruth Mace, Alberto Micheletti and The Conversation
Culture
6.30.2022 11:30 AM
You need to watch David Fincher's most important techno-thriller before it leaves Netflix this week
By Eric Francisco
Science
7.2.2022 12:00 PM
Why is my cat scratching furniture? The answer might surprise you
By Tara Yarlagadda
Related Tags
Share: