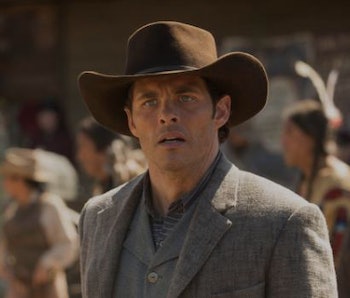 The Westworld Season 2 finale included something the rest of the season never did: a post-credits scene. Not only that, but the final spoiler-filled moments of the season also answered one of the biggest questions we’ve been asking all season long.

I’m still trying to make sense of exactly what happened in that final scene, but here’s what it definitely means and some of the many questions it raises heading into Westworld Season 3.

Warning: Spoilers for the Westworld Season 2 finale, and specifically that post-credits scene, ahead.

First, here’s a quick rundown of what happened in that final scene. We open on William (aka The Man in Black) heading down to the Forge in the same elevator that Bernard and Dolores rode earlier. At the time, it seemed like William was right behind them, but when he exits the elevator it’s clear that a significant amount of time has passed.

The Man in Black steps out to a scene of total destruction. The Forge is barely recognizable, but you can still make out a few defining details. Then, another person (or Host?) steps into view: it’s Emily (William’s daughter who he shot and presumably killed in the previous episode of Westworld).

“I knew it,” William says, referring to his belief that Ford had created a Host version of his daughter.

“I’m already in the thing?” William then asks, presumably referring to The Forge, a system where humans who visited the park are copied and stored as data.

So clearly we’re still in the real world (not a simulation), though doesn’t answer the all-important question of whether William is a Host or not.

Emily then asks her father what he’s been trying to prove all this time. He responds, “That no system could tell me who I am. That I have a fucking choice.”

“And yet, here we are again” Emily responds.

Emily then asks William how long he’s been doing this and he struggles to respond.

“It’s been a long time, William,” she says. “Longer than we thought.”

Emily leads The Man in Black to a room very similar to the one where the Host version of James Delos was kept. They sit down and she prepares to ask him a series of questions to verify.

What does it all mean?

Well, the short answer is that William is definitely a Host, right? Or, to be more specific, he’s a human consciousness successfully copied into a Host body and possibly the first of his kind (glitchy James Delos doesn’t count).

“Fidelity” is what they tested the Host version of James Delos for. It’s also what Dolores tested Bernard for when Ford asked her to create a Host version of Arnold. So it’s safe to assume that Emily (or Host Emily) has been testing her father in the same way to see if this robot copy actually worked.

What’s most important (and still unclear) is when this is actually happening. Does this scene take place moments after the last bit of action? Has William been a Host for all of Season 2? Probably not, here’s why.

It seems more likely that The Man in Black died during the finale after shooting his own hand off. He was then brought back as a Host soon afterwards. That would also explain why the Delos scanner device read him as a human in Episode 9, and why he didn’t find anything when he cut into his own arm to check for Host parts. He wasn’t a Host yet.

So that means the post-credits scene could be taking place months (or years) after the rest of the episode. It could even be happening during Season 3. It also means that Westworld (or at least The Forge) has been pretty much abandoned in that time.

What’s happening in the rest of the park, and outside of the park where Dolores and Bernard have managed to escape. We’ll just had to wait until Season 3 (whenever that might arrive) to find out.