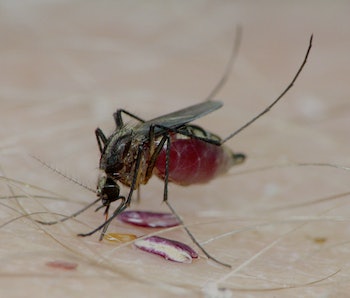 There’s a whole world of infectious diseases out there, and just as humans and other animals have evolved over time, sometimes these bacteria and viruses also change in new and surprising ways. Doctors suspect this is what happened with Keystone virus, a mosquito-borne virus that had never been known to infect humans — until now.

In a case report published June 9 in the journal Clinical Infectious Diseases, a team of infectious disease researchers at the University of Florida describes the first known human case of Keystone virus. In August 2016, a Florida teenager showed up at an urgent care clinic with a fever and a rash after coming home from band camp in northern Florida. Since he hadn’t traveled recently, and since it was around the time that Zika virus was booming in the US, doctors presumed Zika was what he had. But after he tested negative for the virus, they found that they were looking down the wrong path.

But the truth was hard to chase down. “We couldn’t identify what was going on,” J. Glenn Morris, Jr., a professor of infectious diseases at UF and one of the study’s authors, tells NPR. “We screened this with all the standard approaches and it literally took a year and a half of sort of dogged laboratory work to figure out what this virus was.” They finally used genetic sequencing to identify the Keystone virus in the teen.

Keystone virus, the researchers report in the case study, was first identified in Florida in 1964, but until now, it had only ever been seen in mosquitoes. Specifically, Aedes atlanticus mosquitoes, a variety native to Florida and other areas on the east coast of the US. Morris and his colleagues suspect this teenager isn’t the only person who’s gotten infected with the virus, though he’s the first person in which it’s been positively detected.

Infectious diseases can travel all sorts of different ways. Some are spread by ticks, rodents, and even mummies. In these cases, the diseases can often travel among different species. And it looks like Keystone virus has joined those ranks. While this particular case study wasn’t a severe infection, Live Science reports that more serious Keystone infections, including brain infection, are possible.

And while it’s not every day that a disease makes the jump between species, it’s not all that rare either. Recently, researchers discovered that porcine deltacoronavirus, a disease only ever observed in pigs, could potentially infect human cells. So make sure to wear your dang mosquito repellant when you go outside this summer!