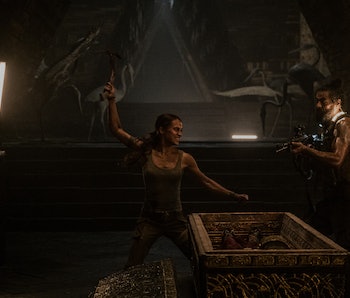 The enduring legacy of Tomb Raider is that people still mistakenly believe that opening ancient coffins is in any way a good idea. In the new film, Alicia Vikander’s Lara Croft and her foes battle over the tightly sealed sarcophagus of Himiko, a (real-life) third-century Japanese queen who was supposedly able to kill people with her touch. Unsurprisingly, the consequences of opening the coffin in the film are devastating. But doing so in real life, archaeologist and actual tomb raider Scott Warnasch tells Inverse, can be just as dangerous.

As soon as the tightly sealed sarcophagus is opened, the dead, immaculately preserved corpse of Himiko starts to fall apart. Within seconds of being exposed to air, her body disintegrates into dust. Contact with her dissolving corpse is deadly: those who handle her watch in horror as the skin on their hands suddenly turns black with decay that travels along the extremities toward the torso and head, like some kind of migrating necrosis.

But what else would you expect after digging up the dead without so much as latex gloves or a face mask?

“Pathogens can be a serious concern to archaeologists and forensic anthropologists and proper safety precautions should be taken whenever handling human remains,” says Warnasch, an independent forensic archaeologist consultant and “iron coffin mummy specialist.” “Although I’m not aware of anyone contracting any diseases from handling potentially contagious remains, it’s certainly in the realm of possibility,” he says.

In 2011, Warnasch was involved with analyzing the Iron Coffin Lady of Queens, the body of a 30-something African American woman in Elmhurst, Queens, discovered inside — what else? — an iron coffin, resembling an Egyptian sarcophagus. While examining it, he and a team of forensic anthropologists realized that the woman’s body had been encased in an iron coffin for over 160 years because she had had smallpox, a deadly virus that was declared eradicated by the World Health Organization in 1980. The fear it raised was the same one that’s addressed in Tomb Raider: Nobody knew how long a deadly pathogen could survive inside a mummy.

“From what I learned from examining the Queens iron coffin mummy, who died of smallpox, the virus can survive for several years if kept in a cool, dark environment such as tomb or sealed coffin,” he says. ”There are accounts of smallpox being spread through the handling clothing and bed linen, so even if the body has decomposed the virus may possibly exist in any remaining fabric.”

Smallpox manifested as a fever and intense skin rash that caused permanent scarring and killed about 30 percent of people with the infection. That’s not quite the same as Tomb Raider’s fictional disease, but smallpox was still the greatest threat in the Queens iron mummy case, says Warnasch, and there were certainly other pathogens that could have survived in those conditions. If the body is well preserved, cholera and typhoid fever — two other deadly diseases — could potentially wreak havoc on unsuspecting archaeologists.

“The scariest part is that archaeologists often don’t know what they are dealing with when they unexpectedly encounter human remains,” he explains.

Archaeological settings like caves, historical structures, and human burial grounds are by their nature rarely visited and thus are peaceful breeding grounds for some deadly pathogens and the animals that live alongside them. Hantavirus, Warnasch points out, lives among the rodents that live in these dark, untouched regions, and “very nasty” molds, fungi, and spores can thrive there too, posing great danger when they are dispersed during excavation. For example, valley fever, a disease caused by inhaling fungus, is a serious concern for archaeologists in California. Even handling frozen remains poses risks.

But raiding tombs, in particular, is uniquely dangerous because it’s never clear what chemicals were used to treat the body in preparation for burial. “Things like arsenic, which was a main ingredient in the early embalming concoctions used during the Civil War period, don’t break down over time and remain lethal,” he says. “There are likely other nasty chemicals used in the preservation process, then and now, which you wouldn’t want to ingest or inhale.”

Fortunately for Warnasch, the smallpox virus left behind on the Queens iron mummy was not viable, but it’s still not clear how long the virus and others like it can survive in those conditions. All the more reason for archaeologists to use the right kind of protection — or to avoid disturbing the dead in general.

As an archaeologist, jokes Warnasch, “I do not condone raiding tombs.”