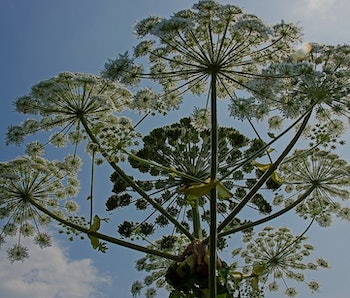 About a century ago, New England garden enthusiasts adopted the British trend of cultivating a towering, white-blossomed plant called giant hogweed in their yards. Considered ‘ornamental’, the plant can grow up to 14 feet tall and cradles bunches of tiny flowers in its stems. It’s already taken root in ten states and was recently found in Virginia, but nobody thinks it’s beautiful anymore. It’s hard to look kindly on a plant that can sear human flesh with a third-degree burn.

“Maybe they just really hated it when their neighbor kids cut through their yard,” muses Virginia Tech biologist Jordan Metzgar, Ph.D. in a conversation with Inverse about how the toxic plant, known to scientists as Heracleum mantegazzianum, managed to become so popular. Giant hogweed sap is phototoxic: If you get it on your skin then are exposed to light, you’ll wind up with a scalding rash, oozing blisters, and scars. If you get it in your eyes, it might even cause blindness, warns New York State’s Department of Environmental Conservation.

Meztgar, a curator at the Massey Herbarium who helped confirm giant hogweed’s presence in Virginia earlier in June, says that giant hogweed has “started to spread more aggressively” in the past 20 years. Before it was discovered by a concerned landowner in Cooke County, Virginia, the noxious plant had already taken root in New York, Pennsylvania, Ohio, Maryland, Oregon, Washington, Michigan, Vermont, New Hampshire and Maine.

The plant has the potential to spread rapidly because each produces 20,000 seeds in one year. “That is a lot of seeds — more than average,” says Metzgar. These can flow downstream, disperse with the wind, or get carried by humans, though it’s not entirely clear why dispersal is so much more widespread now. “Sometimes invasive plants can establish themselves and kinda lay low for decades and start to spread more aggressively,” he says. “They might be becoming a little more genetically adapted, it might be climate change, it might be something else.”

Like all organisms, giant hogweed is just trying to thrive and survive. It’s well equipped to do so, thanks to the evolutionary chain of events that led to it developing furocoumarins, the toxic compounds in its sap. Such “secondary compounds,” says Metzgar, don’t directly help plants grow or reproduce, but they are important nonetheless. “They’re just there to deter herbivores, or, if you want to think of it more dramatically, to punish animals for eating them.”

Humans have been punished just for touching them. When the furocoumarins on a person’s skin are exposed to sunlight or UV rays, they become active, binding with the DNA inside skin cells and killing them. First, the skin turns red and itchy, then blisters form over the next two days. The resulting scars can last for up to six years.

Washing the affected area as soon as possible with soap and water and then staying out of the light is key, says Metzgar. No sunlight, no UV radiation, and “no tanning bed for about two days.”

Metzgar, fortunately, has not encountered any burns in real life, but says the photos online are “sufficiently graphic.”

One of the most dangerous things about giant hogweed is that it has a lot of lookalikes. Most similar is cow parsnip, a tall, mostly nontoxic herb with white bunches of flowers and lobed leaves. This plant is common across America, and touching it won’t leave sufficiently graphic burns on your body but may cause a rash.

But you’ll recognize giant hogweed by its size: It’s much taller, and its leaves are about five feet wide, with lobes deeply cut toward the stem. Its flower clusters are larger and has more flower rays, and its stems are covered in purple spots and stiff white hairs. Cow parsnip generally looks like a milder version of giant hogweed, with smaller clusters and leaves and softer, fewer white hairs.

Because the plants need to be removed by hand — and with a lot of protection — it’s best to stay away and leave it to local parks and wildlife officials to deal with.

More like this
Science
6.26.2022 11:00 PM
The powerhouse of the cell has a more complicated origin than we thought
By Viviane Callier and Knowable Magazine
Science
6.27.2022 11:00 AM
Letting your cat go outside could spread “life-threatening” parasites — new research
By Amy Wilson, Scott Wilson and The Conversation
Science
6.28.2022 10:00 AM
How are drugs absorbed in the body? The science of medicine, explained
By Tom Anchordoquy and The Conversation
Related Tags
Share: