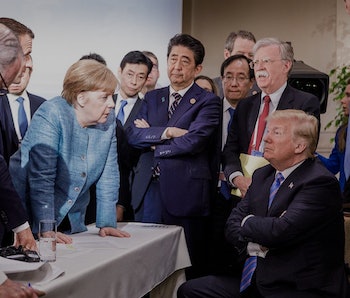 You may or may not have heard that the G7 summit took place on June 8th and 9th in Canada, and that it unwittingly sparked one of the best memes of the year. To put it as simply as possible, the G7 (Group of Seven) is a summit at which some of the leaders of the most powerful industrialized nations in the world meet and discuss policy positions. German Chancellor Angela Merkel was there, as was United States President Donald Trump. And the G7 meme of the Merkel and Trump photo that came out of the event is really something to behold.

In the original photo reportedly taken by Jesco Denzel on June 9, Merkel and other world leaders — who included British Prime Minister Theresa May, French President Emmanuel Macron, and Japanese Prime Minister Shinzo Abe, among others — are all standing around a table, while Trump sits in a nearby chair, arms crossed.

In fact, Merkel is seen leaning on the table looking straight at Trump while also appearing very much in charge. In the photo, Trump seems a little…I don’t know, petulant? Defensive? You’d have to ask a body language expert about Trump on this one, but he certainly doesn’t seem all that comfortable when compared to Merkel.

As these images so often do, the G7 photo of Merkel and Trump quickly became a meme.

Naturally, the meme-ified version of the photo arguably wound up becoming one of the best highlights of the G7 summit, as evidenced below.

There were the art history references:

The appearance of a teddy bear in Trump’s arms:

And, of course, Trump as an actual human baby:

No matter what political results or policy agreements came out of the G7 summit, we will always have this meme. The internet is certainly going to make damn sure all of the people in the photo can’t forget this moment anytime soon.