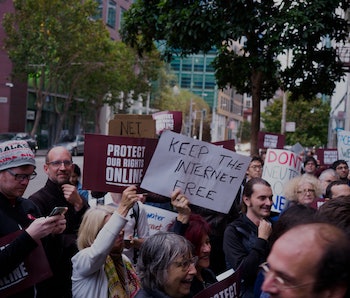 Throw on your blackest outfit, because net neutrality is officially dead. Our right to a free and open internet just got tossed out the window, but what does that actually mean?

First, a brief summary of what the hell is going on: The Federal Communications Commission (FCC) voted to overturn net neutrality in December, and the political backlash has included a bipartisan lawsuit filed by over 20 states and a resolution to overrule the FCC’s vote passed by the Senate, but not the House — yet.

The ruling went into effect today, meaning there’s nothing stopping your internet service provider (ISP) from blocking the online content and services of their choosing or charging you new fees to access them.

What that said, let’s dissect just what ISPs can do without net neutrality in place.

This refers to the creation of “fast lanes,” which could, in turn, refer to service packages, both of which would jack up prices for internet access. For example, there are lots of places you can buy jeans on the internet. Some, like Amazon, are corporations so big it’s hard to even describe their financial assets. Some are tiny businesses run out of people’s basements. Amazon can pay Comcast lots of money so people can access their services faster than, say, your neighbor, who makes jeans and sells them on her Wordpress site.

Also, Verizon could now launch package programs, where you can only access social media if you pay an extra $5 a month, or maybe streaming services add another $15. Or anything, really. They have complete control over how much websites will cost to see and use, or if you can even access them at all.

Both these terms refer to how ISPs can discriminate against lawful content and services. Yesterday, they couldn’t block their customers from anything legally allowed on the internet. Today, they can, and they can also slow the data transmission for any website or app they want. ISPs could use this competitively, to block access to their competitors. They could use it for censorship, and they could use it to entice customers to pay for more expensive plans.

A note on the above: experts say it’s unlikely that ISPs will immediately take advantage of the opportunity to block, throttle, and prioritize. There would be a huge public backlash, and potential legal turmoil. They’ll probably wait for the legislative outcome, and for attention to the cause to wane, before they make any sweeping changes. Which also means we need to stay more alert, so the proverbial rug isn’t pulled out from underneath us.

Battle for the Broadband

Some states have gone as far as to introduce legislation that directly opposes the FCC ruling, enacting their own pseudo-net neutrality. That’s actually kind of illegal, but Oregon and Washington have already passed bills, and California is coming in hot with a set of rules that could set a nationwide standard.

Not only does it enforce the same rules the original net neutrality guidelines did, but it adds on that ISPs can’t designate some sites as “zero-rating,” or traffic that doesn’t contribute to your monthly data cap. The bill is now on its way to the California state Assembly and was endorsed by the former FCC chairman.

So, if you live in a state that has enacted net neutrality, or is working to push legislation, you may be safe for the time being. Maybe.

In the Voting Booth

One final way you’ll definitely be affected is by the movement to oust politicians who aren’t in favor of net neutrality. Congress can vote to overrule the FCC’s decision using the Congressional Review Act, and there’s actually a scoreboard for who is “Team Internet” versus “Team Cable.” More than 8 in 10 voters support net neutrality, so there’s a pool of untapped political fever just waiting to seize the next election.