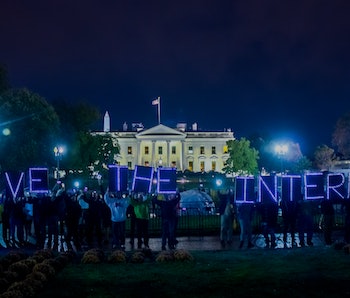 After a long, hard-fought battle with the Federal Communications Commission, the internet is bracing for the loss of net neutrality. With net neutrality finally dead and gone as of Monday, internet service providers will have unprecedented power to control the online experience. So what do Comcast, AT&T, and Verizon have to say about their newfound power?

While each of these major ISPs promises to not disrupt the free and open internet, even if they go back on that promise, it’s unlikely to happen right away. Tech experts and consumer policy advocates don’t expect changes to happen for the next few months, as ISPs will likely avoid any large-scale changes in order to convince policymakers that the net neutrality repeal was no big deal after all. In the meantime, most ISPs have released statements in support of net neutrality measures to assure users they’re still in good hands… for now.

“Don’t expect any changes right out of the gate,” Dary Merckens, CTO of Gunner Technology, told Inverse. Merckens specializes in JavaScript development for government and business, and sees why ISPs are not enacting changes right away, but rather speaking up in defense of a free and open internet. “It would be a PR nightmare for ISPs if they introduced sweeping changes immediately after the repeal of net neutrality.”

Last year, Comcast joined 17 other companies who pledged not to block or slow down internet connections, reaffirming their commitment to the open internet. This was reinforced in December when Comcast Senior Vice President David L. Cohen published an article titled, “It’s Time For Congress to Act and Permanently Preserve the Open Internet.” In it, he asks for a legislative solution to ensure the internet is accessible to the American people.

The Internet is at the core of America’s digital innovation and technological advancement. It is too valuable to be trapped in the middle of a never-ending game of politics and regulatory arbitrage depending on the party in power. We should stop the litigation and legislative threats by the party not in control of the FCC. We need bipartisan congressional legislation to protect the Internet and consumers. Now is the time for both sides of the aisle to come to the table, have a civil discussion, and produce a legislative product that enshrines durable and enforceable net neutrality rules.

AT&T Calls for a “Bill of Rights”

AT&T echoed these sentiments in a press release, once again promising to never block or censor website while also demanding Congress work to create what the company calls an “Internet Bill of Rights.” AT&T Chairman and CEO Randall Stephenson insisted that his company would work with Congress to push for said Bill of Rights to protect the open internet and encourage future innovation. He writes:

Legislation would not only ensure consumers’ rights are protected, but it would provide consistent rules of the road for all internet companies across all websites, content, devices and applications. In the very near future, technological advances like self-driving cars, remote surgery and augmented reality will demand even greater performance from the internet. Without predictable rules for how the internet works, it will be difficult to meet the demands of these new technology advances.

Verizon Wants to Move On

Like its competitors, Verizon seems fine with the FCC rolling back net neutrality protections while calling on the government to enact new, vague ones. Last year, Verizon released a video where one of its top legal counselors tried to explain that the FCC is not actually killing net neutrality, in what was considered an over-simplified, poorly researched argument. Since then, Verizon has offered supportive sound bites, such as Senior Vice President Will Johnson’s support of new regulation, stating that “open Internet protections deserve to be written in ink, not pencil.” Despite that, Verizon has been explicit in their overall support of the FCC’s decision to repeal net neutrality.

We’re very encouraged by Chairman Pai’s announcement today that the FCC will move forward next month to restore the successful light-touch regulatory framework for internet services. For decades, the internet flourished under a bipartisan regulatory approach that allowed it to operate, grow and succeed free of unnecessary government controls. Two years ago, the FCC reversed course radically and put in place a set of rules based on monopoly train and telephone regulation from previous centuries. That outdated approach was unnecessary and out of step with today’s dynamic and competitive internet. It undermined investment and innovation, and posed a significant threat to the internet’s continued ability to grow and evolve to meet consumers’ needs. Now, the FCC appears poised for a much-needed return to the approach that fostered so many years of internet openness and innovation.

While these companies have offered promises to maintain the principles of net neutrality, they worked extensively to remove the regulations that once held them accountable to such standards. According to an investigation published in Fast Company, AT&T, Comcast, and Verizon spent at least $26.3 million on lobbying the federal government since April 2017, when talks on net neutrality were in full swing. The same report says that between 2008 and early 2017, these three companies and their trade organization, the National Cable & Telecommunications Association, had spent $572 million lobbying federal lawmakers on subjects that included net neutrality.

ISPs are working hard to convince users that they will not abuse the windfall of power they’ll receive come Monday morning. This might be true in the short term, but the protective measures that once ensured fair ISP behavior are gone. It’s now up to the internet users to watch for future abuses.

More like this
Innovation
6 hours ago
Indoor lights make us sick — this technology could fix that
By Miriam Fauzia
Innovation
5 hours ago
Will Miami exist in 2050? 4 strategies could keep U.S. coastal cities afloat
By James Gaines
Innovation
8.11.2022 11:00 AM
“Quantum materials” could give the human brain a run for its money, scientists say
By Nathaniel Scharping
Related Tags
Share: