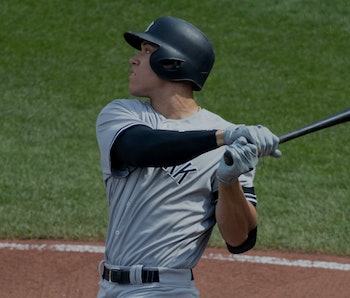 An unusually large increase in home runs over the past four years recently prompted the MLB to launch an investigation into why so many balls are clearing the fences. In the report, published in May, a team of ten physicists spent 84 pages analyzing drag coefficients and aerodynamic tests, only to strike out in their attempt to identify the issue. The balls themselves are not the problem, they concluded. Of the remaining variables, one strange geological factor stands out.

Every baseball used in both the major and minor leagues is rubbed with Lena Blackburne rubbing mud, a specific type harvested from a tributary of the Delaware River. It is so crucial to the leagues that the exact location of the source is a trade secret. In their report, the MLB committee noted that the application of this mud might change the uniformity of the baseball surface, which would affect the ball’s lift and flight patterns. While Lena Blackburne Rubbing Mud has never revealed the exact soil composition of their mud, the geological history of the Delaware River basin gives us a few clues, which in turn may eventually help the MLB figure out whether the mud is really to blame for the league’s unnaturally high number of dingers.

It is useful to know that the Delaware River area is part of the Atlantic Coastal Plain, which has lived through 100 million years of different geological events. It lasted through the Pleistocene Epoch (2.6 million to 11,700 years ago), when glaciers from what is now the New York area began to melt, making their way down to what would eventually become New Jersey.

The difference between applying a sandier mud or a more clay-based mud to the ball can produce different results — changing, in particular, how the ball absorbs water. “Clay is going to have more of a negative charge than sand,” Kaufman says. “So it’s going to hold on to water more than sand. Clay is usually stickier.”

In 2009, CNN reported that the tributary was near Delran, New Jersey, making our analysis even more specific. If baseball’s “good ole mud hole” is actually near Delran, then from the New Jersey Geological Survey tells us that there are several types of sand and clay found there. The area near Delran is banked on two sides with sediment from the Cape May Formation, which contains “fine to medium” quartz-based sand and “a few pre-pleistocene taxa,” writes NJGS.

Factors like climate and biology (read: organisms left over from the pre-Pleistocene) can contribute to soil formation, Kaufman says, but he admits he is unsure of how they might have contributed to the unique characteristics of New Jersey’s rubbing mud. The primary factors shaping the sand are local minerals like glauconite and chert (also known as flint) that turn the mud into what Lena Blackburne Rubbing Mud owner Jim Bintliff called a “fine-grit sandpaper” in a 2014 interview with NBC.

Glauconite and chert are both brittle minerals that break down easily — in fact, chert was used to make tools during the Stone Age. So when applied to a baseball, these could change the shape of the exterior covering, thus changing its flight patterns.

“One of the things that is known to affect the flight of the ball, the carry of the ball, is the roughness of the surface of the ball,” Alan Nathan, committee chairman of the MLB study and professor emeritus at University of Illinois at Urbana-Champaign, told the Associated Press in May. “[Differences] in how that mud is applied could possibly provide a clue to it.”

In the end, it will likely come down to how the mud is applied, which is already partially codified in the MLB rulebook. But rubbing each individual baseball with the same materials used for stone-age tools would likely produce inconsistencies across the MLB, something that the next committee would do well to investigate.